The 100th Kisan Rail will run from Sangola in Maharashtra to Shalimar in West Bengal. This train will cover a distance of 2132 km in less than 40 hours. Through this train, pomegranates from Sangola, oranges from Nagpur and melon of Jeur, Belvandi, Kopargaon will reach West Bengal and Northeast. 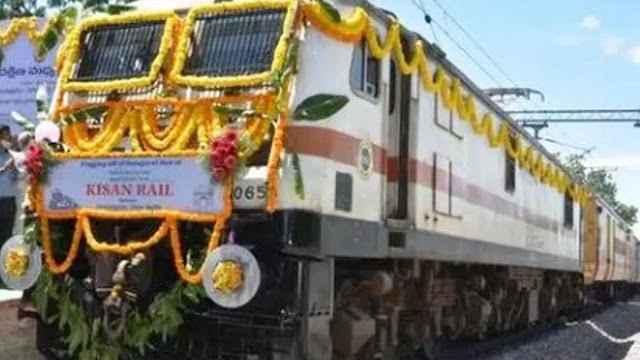 Today, the 100th Kisan Rail was started, in less than 5 months, the 100th train was the first such train in August.

Indian Railways started Kisan Rail on 7 August this year. Since then, within a span of just 5 months, now the 100th Farmers Rail is going to run, which PM Modi will flag today. Let us know whether the specialty of this train and why it is important?

100th farmer train from where to where

Such 100th Kisan Rail will be flagged off by Modi ji at 4:30 pm today. It will run from Sangola in Maharashtra to Shalimar in West Bengal. This train will cover a distance of 2132 km in less than 40 hours. Through this train, pomegranates from Sangola, oranges from Nagpur and melon of Jeur, Belvandi, Kopargaon will reach West Bengal and Northeast. From this train, such items like fruits and vegetables are transported which spoil quickly.

50% discount to farmers in transportation of fruits and vegetables

In October, the Railway Ministry announced that 50 percent subsidy will be given in the transportation of fruits and vegetables in Kisan Rail. This subsidy is being given under the Operation Green-TOP to Total scheme. Railway Minister Piyush Goyal had said that subsidy has been reduced to 50% in transporting vegetables and fruits by farmer rail.

As part of the self-reliant India campaign, the Ministry of Food Processing Industries had announced the expansion of Operation Green Scheme for six months on a pilot basis to bring all fruits and vegetables (total) from tomatoes, onions and potatoes (tops) within its ambit.

First train from Maharashtra to Bihar from where to where

The first such train ran from Maharashtra to Bihar on 7 August this year. This train goes from Devlali station in Maharashtra to Danapur station in Bihar. It takes about 32 hours in its journey. Railway Minister Piyush Goyal and Union Agriculture Minister Narendra Singh Tomar started this by video conferencing.

Farmers rail will have refrigerated coaches. It has been built by the Railways as a new design with a capacity of 17 tons. It has been built in the rail coach factory Kapurthala. Containers in this train are like freezes. Meaning, it is an on-going cold storage, in which farmers can keep perishable vegetables, fruits, fish, meat, milk etc.

With this, perishable agricultural products like vegetables, fruits, meat, fish and milk will be transported from their growing areas to the areas where they have a good market.

Announcement was made in the budget

Actually, the Center has set a target of doubling the income of farmers by 2022. In this series, Finance Minister Nirmala Sitharaman had announced during the budget speech in February that farmers can sell fruits and vegetables in those cities of the country, where they will get good price. For this, farmers train will be run. Under this Public Private Partnership (PPP) scheme, there will be a system of transportation of farmer produce along with cold storage.

The facility to carry fruits and vegetables along with the facility of air-conditioning was first proposed in the budget of 2009-10 by the then Railway Minister Mamata Banerjee, but it could not be started.