Geeta: Where is the girl Sushma Swaraj brought from Pakistan

"A river, a big temple of Goddess built on its banks and a bridge with railings" ... It is that memory of Geeta's childhood, with which she is looking for her family members who were separated twenty years ago. 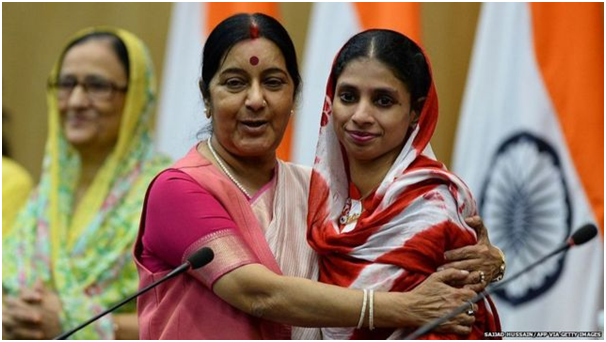 Since childhood, the deaf and dumb Gita reached Pakistan by mistake on the Samjhauta Express around 2000.

In 2015, former External Affairs Minister Sushma Swaraj brought him back to India. Since then, Geeta is in search of her parents.

But till now she has not been able to know from which village, which district or which state of India she had reached Pakistan.

For the past five years, Geeta was waiting that soon someone would bring the news of her family members to find out.

Sushma Swaraj, as a foreign minister and on a personal level also made many efforts to find her family members on Twitter.

But even after this, no trace of his family members could be found. Meanwhile, Sushma Swaraj's death hurt Geeta immensely.

Due to isolation due to Kovid epidemic, Gita's patience dam was broken and for the last few months, Geeta has started searching for her house on the basis of her geographical memory.

Gyanendra and Monika Purohit, who live in Indore, are helping them in their quest.

Gyanendra and his team are on the road from Maharashtra to Chhattisgarh, and Telangana on the basis of Geeta's childhood memories, reaching the places where Geeta's village is likely to be.

Gyanendra told the BBC what happens when Geeta reaches the banks of the river.

He says, "When Geeta reaches the banks of any river, she becomes very happy. There is a sparkle in his eyes and a hope arises in the mind. Because he feels that his house is on the banks of a river.

Geeta says that her mother used to tell her about the steam engine. In such a situation, Geeta became very happy when we reached Latur railway station near Aurangabad. There is no electricity and the train runs with a diesel engine.

Even after coming here, there was hope in Geeta's mind because there was no electric engine in Geeta's childhood memories. Geeta says that her mother used to tell her about the steam engine.

Keeping in mind what Geeta has been told, Gyanendra and his team have come to the conclusion that Geeta will probably be from the areas bordering Maharashtra.

But after this long journey, some memories which are left of Geeta are left. They have become very blurred. Sometimes the picture of the village will be clear in his mind… Now some pieces of that memory are left.

Gyanendra, who understands sign language, says that seeing the river, it comes out of his mouth, "Just like this river is in my village." And there is a railway station near the river. There is a bridge over which the railing is built. There is a two-storey dispensary nearby. Maternity is home. It is very crowded. "

Gyanendra says' Geeta says that her farm used to have all three of sugarcane, rice and peanuts .... If the field is seen on the go, then immediately stop the car and get down in the field, in the hope that if working in the field May they find their mother. "

She says, "Geeta remembers a lot. He remembers geographical things like a railway station, his village, a river. But you know how much India has changed in the last 20 years. Today, if you go to a place where you went as a child, then you might not recognize that place. In such a situation, it is possible that the temple that the Gita is looking for, other than the temple, other buildings have also been constructed. His family may have gone away from that place… .etc. Etc. ”

Monica admits that the tragedy of being separated from home and the endless quest to get her back has hurt Gita mentally.

She says, "When we say that Geeta moves forward in her life, she marries immediately." She says that 'she is too young, she has to find her mother. If she gets married, her family will be very angry. 'Because Geeta feels that she is just a 16 to 17 year old girl. While he will be at least 25 to 28 years old. Geeta is a very cute baby girl but sometimes it becomes difficult to take care of her. She starts crying at the point. "

By the time this news was written, Geeta was sitting with Gyanendra and his team in the back seat on the left side of a car, looking at the fields left behind behind the glass.

So that somewhere they see their mother coming out of a field, they see the river of their village, the temple or the railing of the bridge which they last saw in their childhood.