Why is Nepal making India's General an honorary president of its army?

Under the decades-long tradition in the armies of India and Nepal, General Manoj Mukund Narwane, the Chief of the Army Staff of India, will be conferred the title of Honorary President of the Army of Nepal. 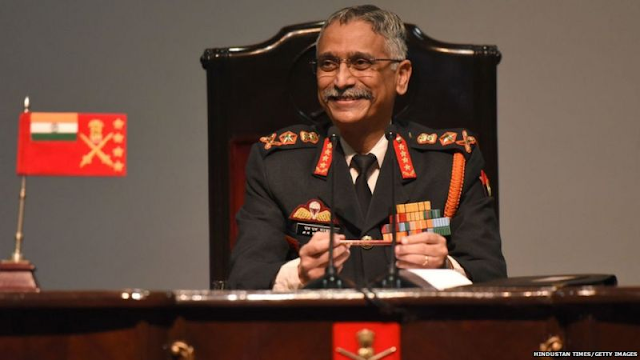 Narwane is visiting Nepal this week and the President of Vidya Devi Bhandari will honor him with this title.

Earlier in 2017, the title was given to the then Army Chief General Bipin Rawat.

General Rawat has been made the Chief of Defense Staff (CDS) in January this year, that is, the chief of all the armies.

General Narwane's visit to Nepal is also important in this sense, because in the last few months, there has been a lot of estrangement, not just a rift between the two countries.

It started in the month of June this year when India built the 80 km road of Lipulekh and Dharchula in Uttarakhand. Nepal objected to this.

Then, within a few days Nepal released a new map and got it approved by its parliament, which showed Lipulekh, Kalapani and Limpiyadhura as part of Nepal.

Nepal's Prime Minister KP Sharma Oli gave rise to a new controversy, describing these areas as an integral part of Nepal, which had never been discussed before.

Tension was also seen on the border of India and Nepal when the Nepal Army was accused of firing in which Indian civilians were injured. Also, for the first time it happened that Nepal built a 'border post' along the border with India.

During the same tussle, General Narwane also gave a statement, which created a new controversy.

He had said about releasing the map by Nepal that 'he is doing this at the behest of someone'.

Although Narwane did not take the name of any country, but his gesture was being considered towards China.

India and Nepal have been following tradition for years

This tradition has been going on for a long time. The first title was given to General KM Cariappa, the 'Commander-in-Chief' of the Indian Army in 1950.

Colonel Sanjay Srivastava says that there is also a Gurkha regiment in the Indian Army in which the recruitment of citizens of Nepal has been going on since the British rule.

In 2016, the then President Pranab Mukherjee conferred the honorary title of the Army of India to Nepal Army Chief General Rajendra Chhetri.

Not only this, they say that junior and senior commissioned officers of Nepal Army have also been trained in India.

For example, he says that the President of Nepal's army, which was conferred the honorary President of the Army of India by President Ram Nath Kovind last year, General Purna Chandra Thapa has graduated from the 'National Defense College' of India.

Apart from this, General Thapa has also obtained a master's degree in defense and strategic affairs from Madras University.

Also, Nepali civilians in the Indian Army get 4 months' leave in two years while Indian soldiers working in the same regiment are given only one month's leave.

Colonel Chandra Mohan Jagota, who retired from the Army's 'Armored Corps', told the BBC that it is necessary for all officers working in the Gorkha Regiment to learn the language of 'Gorkhali', or Nepal.

The personal weapon of everyone posted in this regiment is 'Khukri'.

Colonel Jagota says that the Gorkha Regiment is also numerous. Like the first Gurkha regiment, the second and tenth etc. There are several battalions of each regiment, in which Nepalese citizens are being restored and they get an exemption in their restoration.

He said that when he was reinstated as an officer in the army, the Nepal Army officers or 'cadets' were among those who trained with him.

Since Colonel Sanjay Srivastava is from Ranchi, he says that Bihar and Jharkhand Police also have a tradition of getting jobs for Nepal's citizens.

In Bihar, the battalion in which Nepal's citizens are reinstated, its name is 'Bihar Military Police' (BMP), while in Jharkhand it has been known as 'Jharkhand Armed Police' or 'Zap'. The name of the guest house of 'Zap' in Ranchi is 'Khukhari Guest House'.

The Nepalese Army has also issued a statement regarding the visit of General Narwane, which states that he is coming to visit Nepal on the 'official' invitation.