Former Sri Lankan spinner Muttiah Muralitharan, who took the most wickets in Tests and One Day matches, has said that the film on his life will definitely be released as planned. 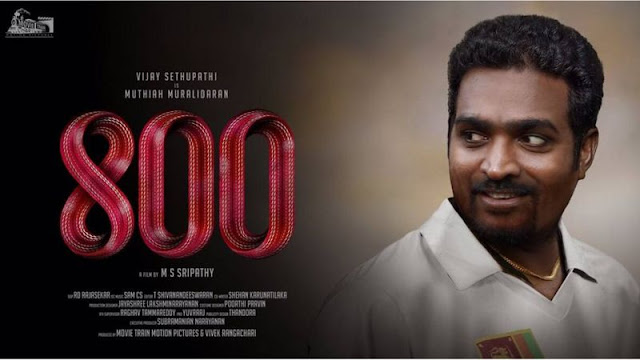 This film is being strongly opposed in South India. The film's lead artist Vijay Sethupathi has also decided to withdraw from the film due to the protest.

Talked to Muttiah Muralitharan and questioned him about the ongoing controversy about this film.

Muralitharan, 48, says, "I have faced many controversies in my life. Not only in cricket, more controversies have been faced. This is one of them."

Muralitharan, who belongs to the minority Tamil community during a long and violent civil war between the Tamil separatists and the Sinhala majority security forces in Sri Lanka, worked hard to make a place in the country's cricket team.

He was in controversy for his bowling. During a match in Australia, his bowled ball was called 'choking' and he was called Noble.

In the game of cricket it is allowed to throw the ball by keeping the hand at a particular angle. But Muralitharan's hand was slightly bent, due to which his throwing of the ball was called 'chucking'. At that time the ICC considered 'chucking' to be invalid.

But after the end of this controversy, he became one of the best bowlers in the world.

But the film that is being made on his life is not on this controversy but on the record of taking 800 wickets in Test matches. The name of the film is '800'.

The shooting of the film has not started yet but its poster was released recently. In this, well-known actor Vijay Sethupathi appeared in the role of Muralitharan, after which the film has started to protest.

The #ShameOnVijaySethupathi hashtag trended on social media in Tamil Nadu and people started demanding that Vijay should not play this role.

The producers of the film called the film "biography on sports" and said that it will inspire the youth. But critics say that this film is an attempt to tell the greatness of a character who has himself become a disputed issue of politics.

Last year, there was a special event in Sri Lanka during the presidential elections, due to which Muralitharan's statements are opposing the film. In this event, Muralitharan celebrated the Sri Lankan civil war in 2009 and supported the candidature of Gotabhaya Rajapaksa.

During the civil war, Rajapaksa used to be the defense minister when the government forces launched a brutal repressive campaign against the Tamil separatists. Thousands of people were killed in this campaign.

In the event held during the elections, Muralitharan had said, "The happiest day of my life" came in the year 2009 when the country "had no more fear".

According to an estimate, around 40,000 ordinary Tamil civilians were killed in the last days of the Sri Lankan civil war. People in Tamil Nadu consider themselves close to the minority Tamils ​​of Sri Lanka and this is a very sensitive issue for them.

V Prabha, a young agitator who works in Chennai, says, "Muralitharan is Tamil but he doesn't behave like Tamils. We don't want him to enter Tamil Nadu in any way - whether through films or in person." . "

She says, "Muralitharan has done many wrongs during the Sri Lankan civil war. We do not want him to be portrayed as a hero in the Tamil community."

Muralitharan, who is in Dubai for the IPL, says, "I said that peace had been restored in the country since 2009. The day the war ended was the happiest day for me because peace was established on that day." Was, not because the Tamil people had died there. "

Muralitharan is the bowling coach of the IPL team Hyderabad Sunrisers.

He said, "I did not take anyone's side in the civil war - neither Rajapaksa nor anyone else. I chose the middle path. People in India do not know what is going on in Sri Lanka."

Muralitharan has close relations with India, particularly with Tamil Nadu. His wife is from there. He has played for Chennai Super Kings between 2008 and 2010. He has been one of the most popular players of the team.

Why so much controversy about the film?

V Prabha says, "Even in 2010, people of Tamil Nadu knew what had happened to the Tamils ​​in Sri Lanka but they never linked those incidents to Muralitharan.

"But when he started supporting the Sri Lankan government, we started a campaign against him and by 2013 we managed to ban him and other Sri Lankan players."

In 2013, the Tamil Nadu government banned the involvement of Sri Lankan players in the IPL on the issue of human rights violations of Tamils ​​in Sri Lanka.

Journalist Kavita Muralitharan, who lives in Chennai, says that the film's strong opposition to Muttiah Muralitharan's life has been due to 42-year-old Vijay Sethupathi.

She says, "Vijay is seen as a progressive artist, he is very vocal on social issues. In such a situation, many people did not want to see him as Muttiah Muralitharan."

"People in Tamil Nadu take films very seriously  Here the film is more than just a story, Tamil cinema and politics are interlinked. "

Tamil cinema industry, Kollywood is also sometimes associated with the sense of Tamil identity. Many chief ministers of this state have a relationship with the cinema world. Before joining politics, many people who had become big names in the cinema world later became Chief Ministers of the state.

There was pressure from both actors and politicians to leave the film for Vijay Sethupathi.

But the final decision on the matter came when Muralitharan himself intervened and asked Vijay to leave the film.

Muralitharan says, "Why should Sethupathi have an uneasy problem because of this film? I

Why should I create any problem for them?

"This is my fight, not theirs. It is my responsibility to fight it."

Muralitharan is seen as a hero in Sri Lanka. Here is a mixed reaction to this film.

Cricket writer Andrew Fidel Fernando, who lives in Colombo, says, "I would like to see a film about him, not because he is a great player but because I want to understand the complex personality of Muralitharan."

"I felt a little strange about the reaction that immediately came about the film. We do not yet know what the film will be like."

But those people of Tamil community living in Sri Lanka, whose family members have gone missing during the civil war, are more passionate about this film. Many have demanded the cancellation of the film's plan.

Gopalakrishnan Rajkumar, the representative of the group working for such families, said, "Muralitharan said that the happiest day of his life had come in the year 2009. But this was the period which affected the Tamils ​​living all over the world. It was worse than the era of the Corona epidemic. "

"He is a Tamil, so he became very popular. But he did nothing for the Tamils ​​living here."

He was hopeful that he would be able to shoot the film early next year, but now after the lead actor has left the film, a new problem has arisen for him.

But Muralitharan is confident that one day the world will be able to see his story.

He says, "This film will definitely be made. It is not just about Tamil Nadu. The producers of this film are from Mumbai and they want to make this film in many languages. They want it in Tamil, Hindi, Bangla, Sinhala, Telugu, Malayalam and Want to make English subtitles together.

"This film is about sports. How can there be such a big controversy?"

But despite this, the controversy that has arisen regarding the film 800 has made it very clear that it is difficult to separate both cricket and politics from each other.