For Sunrisers Hyderabad, Kane Williamson played a match-winning innings of 50 runs in 44 balls. During this, he hit two fours and two sixes. 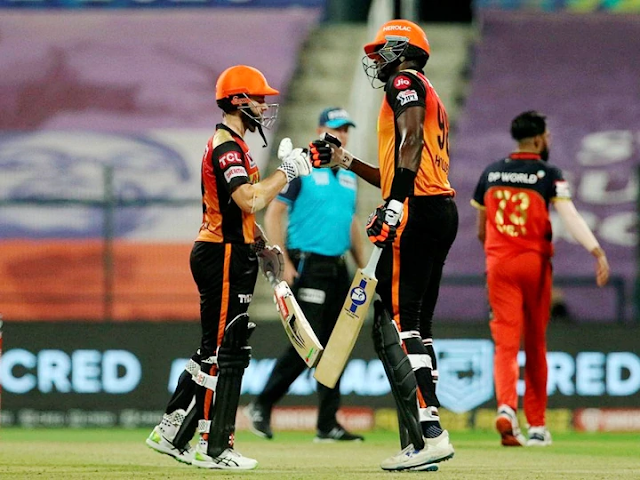 SRH vs RCB, Eliminator: Sunrisers Hyderabad defeated Royal Challengers Bangalore by six wickets in the eliminator match of IPL 2020. With this defeat, the tournament ended for RCB. Hyderabad will now play the second qualifier against Delhi Capitals.

Royal Challengers Bangalore scored 131 runs for the loss of seven wickets in 20 overs thanks to the brilliant innings of AB de Villiers (56) in this match. In response, Sunrisers Hyderabad chased down the target by losing just four wickets in 19.4 overs.

Earlier, Royal Challengers Banglero started off to bat first after losing the toss. In the second over, captain Virat Kohli was dismissed after scoring just six runs. Holder made him his victim. After this, on the score of 15 runs in the fourth over, Devdutt Padikal also returned to the pavilion after scoring one run.

Aaron Finch and AB de Villiers shared a 41-run partnership after two wickets fell for 15 runs. Finch, who was seen in excellent touch, was dismissed after scoring 32 runs in 30 balls. During this, he hit three fours and a six.

RCB's innings faltered after Finch was dismissed and lost wickets at regular intervals. During this, Moin Ali 00, Shivam Dubey 08 and Washington Sundar 05 were dismissed.

However, de Villiers held one end to the end. He scored the highest 56 runs. During this time, five fours came off his bat. At the end, Mohammad Siraj returned unbeaten after scoring 10 and Navdeep Saini 09. Both of these somehow brought the team's score beyond 130.

At the same time, Jason Holder bowled for Sunrisers Hyderabad. He took three wickets for just 25 runs in his four overs. Apart from this, T Natarajan got two and Shahbaz Nadeem got a breakthrough.

After this, Hyderabad started off well after chasing a modest target of 132 runs from Bangalore. Srivats Goswami, playing the first match of this season in the first over, returned to the pavilion without opening an account.

After this, captain David Warner and Manish Pandey added 41 runs for the second wicket with speed. But Warner scored 17 runs off 17 balls and was caught out behind the wicket off Siraj's ball. After this, Pandey, who appeared in the best rhythm in the 9th over, also returned to the pavilion after scoring 24 runs. During this, he hit three fours and a six.

After Pandey's dismissal, Priyam Garg also went on to score just seven runs in 14 balls. Kane Williamson blocked one end after falling four wickets for just 67 runs in the 12th over. Williamson scored an unbeaten 50 off 44 balls. During this, he hit two fours and two sixes. At the same time, Jason Holder also remained unbeaten after scoring 24 runs in 20 balls.