Is China's railway project near Arunachal a matter of concern for India?

Chinese President Xi Jinping recently asked his officials to complete the Sichuan-Tibet railway project as soon as possible. He insisted on completing the Yan-Linzhi railway line of this project. 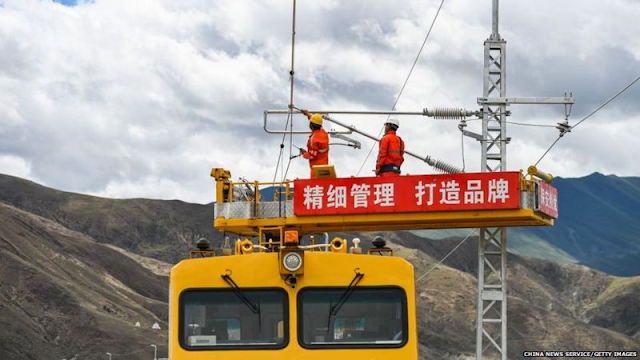 The Yan-Linzhi railway line will connect China's Sichuan province to Linzhi in Tibet, which is close to India's border with Arunachal Pradesh.

Xi Jinping says that this railway line is very important for stability in the border areas.

According to the Chinese government media Global Times, the entire project is worth $ 47.8 billion.

The journey from this railway line to Chengdu, the capital of Sichuan, to Lhasa in Tibet will be 13 hours, which is now 48 hours.

Is it a matter of concern for India?

Alka Acharya, professor of Chinese studies at JNU, says that this is not a new thing about which India did not know before.

He said, "The boundary between the two countries is not fixed and both countries are working on their infrastructure to strengthen themselves. So because of this, tension also increases. India already knows all this and can say In response to that, India is also emphasizing its infrastructure along the border. It has picked up in the last 7-8 years. But China's infrastructure is far better and more expensive than India. "

Professor Phunchuk Stodban of the Institute of Defense Studies and Analysis says that whenever China develops infrastructure, it also has a military perspective.

He said, "This means that by creating infrastructure, China can bring missiles to India's border. Then they do not need nuclear weapons. They can also target with missile. This pattern of China I have in places like Kazakhstan, Kyrgyzstan Have seen, they build railways first and this increases their missile capability. Whereas India and Pakistan talk about nuclear bombs directly. China's strategy is that it does not talk about nuclear weapons. It just surrounds is."

Why should India worry about this railway project?

On this, experts say that the Brahmaputra river is a major source of water in India in this area. There have been reports that China wants to divert this water for itself.

They also say that after the completion of this project, the movement of Chinese army in this area will also increase. Where the Chinese army used to take 36 hours to reach, now it can be reached in 9-10 hours i.e. rapid deployment will be possible. It will also become easier to bring Chinese tanks and missiles to the Indian border immediately.

China is developing in Tibet

BR Deepak, a professor of JNU itself, says that China has been doing the work of building infrastructure in Tibet for decades.

He says, "Before 1962, China started laying a network of roads in eastern Tibet adjoining its Sichuan province. China knew that it was dangerous to reach this area. There is a plateau area. When the Chinese forces in 1951 When it entered Tibet, the Tibetans attacked the Chinese army by climbing the high hills. The Tibetan army, despite being weak, could not reach the Chinese army. Because of this, they made a strategy how to build roads and capture the sectors. "

Professor Deepak explains that after this, by 1957 China had prepared the road to Aksai Chin and this was one of the reasons why the relations between India and China were bad at that time.

He says that in China's Thirteenth Five-Year Plan, building infrastructure on the Tibet border was a priority, for which China also gave a budget of $ 20 billion. But the budget of the railway project that Xi Jinping is talking about is different.

Professor Stodban says that India has also accelerated the work of its stalled infrastructure in the border areas in the last few years.

He says, "A 255-km strategic road from Ladakh's Darbuk to Daulatbeg Oldi is being built, which China has responded to and since then India-China stand is going on, no solution is being found. "India is also building new airports, building roads. Recently the Atal tunnel was inaugurated in Ladakh."

They say that Daulatbeg Oldi Road is a strategic road according to India's security. She goes in parallel with the LAC, through which the Indian Army's connectivity is possible up to the Tibet Xinjiang Highway.

However, Professor Deepak says that there are very few projects on the border of India with China.

He says, "India's border projects will not be more than 60-70 and they are also running late. There are some projects which have not been surveyed. There are 2-3 railway line projects out of these projects. Surveys were to be completed by 2020, which have not been done yet. The nine-kilometer Atal tunnel was also inaugurated many times but it was ready to go which was recently inaugurated by the Prime Minister. So how many thousands of kilometers long railway line to build It will take time? India did not pay attention to it at first. Like going to Tezpur in Assam  But the road is very bad. Whereas China had made its access there only in 1962. "

Is the solution difficult?

Professor Alka Acharya says that it is not that China is now doing this to surround India.

He said, "In the 1980s a theory of String of Pearls was taken out which said that China was trying to surround India, investing in neighboring countries of India, investing in ports. But now the profile of China has increased in this area. Now the distance between China and India has become much different. So now to say that China is doing all this especially by targeting India, in a larger perspective It doesn't look like it when you see it. "

But is there any solution to this geopolitical game soon?

On this, Professor Stodban says, "America's election is over, then it may be that these tensions are reduced or else India will have to put its resources in the border areas. China says that construction work on India border is stopped And in the same way, India also argues that China should be stopped as well. Its solution can come out of bilateral negotiations but it also has no mechanism at the moment. "