Sunrisers Hyderabad have made it to the IPL-13 playoffs. Hyderabad defeated Mumbai Indians by 10 wickets in the last league match played in Sharjah. 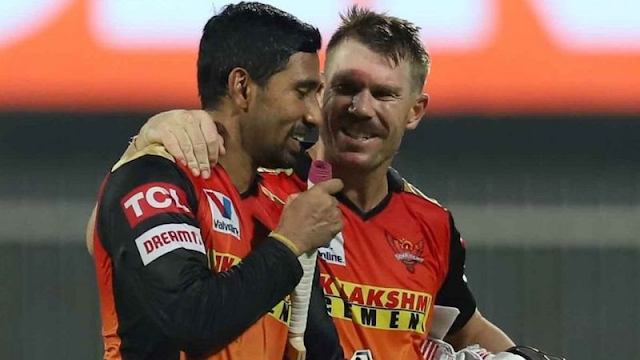 The target of 150 runs for Mumbai's victory was proved by the Hyderabad openers and gave the team victory in the 18th over. For Hyderabad, captain David Warner scored 85 not out and Wriddhiman Saha scored 58 not out.

With this victory Hyderabad secured the third position in the point table. Now this team will compete with Royal Challengers Bangalore to make a place in the second qualifier.

Captain David Warner and Wriddhiman Saha played memorable innings for Hyderabad. Both these batsmen dominated the Mumbai bowlers right from the beginning. Wriddhiman Saha collected a six and a four off Nathan Culter Nile in the second over and indicated that he was not ready to give up the play-off ticket. In the third over, he hit two consecutive fours off Dhawal Kulkarni's balls.

In the fourth over, Captain Warner opened his hands and hit fours off three consecutive balls of James Pattinson. Mumbai captain Rohit Sharma handed the ball to Rahul Chahar in the fifth over to stop the pace of runs. In this over too, both the openers hit a four. When six overs of the powerplay were over, 56 runs were added to Hyderabad's account.

Even after the power play, both the openers kept scoring easily. In the ninth over, Saha hit two fours off Krunal Pandya. Warner completed the half-century by scoring a six off Chahar in the 12th over. Saha also completed 50 runs in this over. When the 15th over was over, 137 runs were registered in Hyderabad's account. From the very first ball of the 18th over, Warner scored a four and gave Hyderabad the victory. Warner scored an unbeaten 85 from 58 balls with the help of 10 fours and a six. Saha remained unbeaten on 58 from 45 balls with the help of seven fours and a six.