IPL 2020: This veteran player of CSK will not play IPL, retired from all formats of cricket!

The news of Shane Watson, the all-rounder of the IPL franchise Chennai Super Kings, is retiring from all formats of cricket along with the IPL. Please tell that Watson has said goodbye to international cricket in 2016. 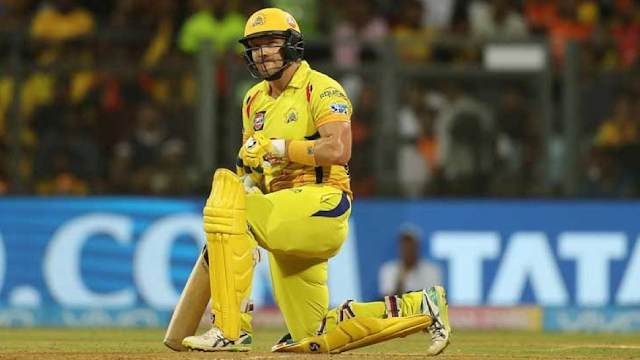 Shane Watson of CSK will not play IPL

Watson retired from international cricket in the year 2016

Watson is disappointed with poor performance in IPL 13

CSK veteran Shane Watson, who made the IPL franchise Chennai Super Kings the champion on his own in the year 2018, has decided not to play any other T20 cricket league along with the IPL.

Actually, according to media reports, it is coming out that Watson is retiring from all formats of cricket, including the world's largest T20 league IPL. It is being told that Shane Watson is very disappointed about his performance playing for CSK in the IPL 2020 and that Watson has taken this decision after CSK is out of this tournament.

Shane Watson will not be seen on the cricket field

Significantly, according to the reports of English website Times of India, Shane Watson will no longer be seen on the cricket field. Actually according to this media report, a player of Chennai Super Kings has told that Watson is about to retire from IPL and other cricket leagues.

Shane Watson, who retired from international cricket in 2016, was very emotional after CSK's exit this season. In such a situation, he has discussed the decision with a teammate. However, so far there has been no official announcement from the Chennai team and Watson itself. Watson disappointed with poor performance in IPL 2020

Chennai Super Kings disappointed everyone with their poor performance in IPL season 13. This is the first time in IPL history that the team could not reach the playoffs. The big reason for this is the poor form of opener Shane Watson.

This season Shane Watson scored 299 runs in 11 matches, including 2 half-centuries. The lack of this legendary Australian player who makes a mark in the IPL on the basis of his lethal batting every season, may hurt Chennai Super Kings next season. It is known that Shane Watson scored 3874 runs in 145 matches of his IPL career with the help of 4 centuries and 21 fifty.

Former Australian all-rounder Tom Moody has tweeted and praised Shane Watson. The end of a brilliant IPL career according to Moody. You made yourself proud and made every team perfect. Let us know that Watson has won the IPL with two different teams.

At the same time, in the first IPL in 2008, Rajasthan Royals were the heroes of victory in which they scored 472 runs and took 17 wickets. Subsequently won the title with Chennai in 2018. He scored 555 runs in that season and also took six wickets.