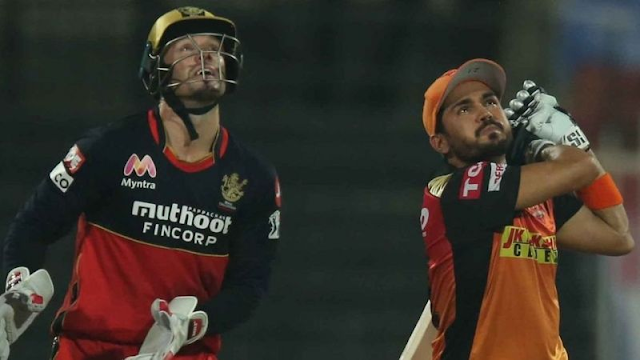 This is Hyderabad's sixth win in IPL-13, while Bangalore has suffered a blow for the sixth time.

Hyderabad did not start well. Captain David Warner was dismissed by Washington Sundar in the second over. Warner scored eight runs. After this, Wriddhiman Saha formed a 50-run partnership with Manish Pandey, who came in at number three.

Manish Pandey was seen in good rhythm. He scored 26 runs in 19 balls with the help of three fours and a six.

In the seventh over of Hyderabad's innings, Yuzvendra Chahal put a break on Pandey's innings. Chahal also gave Hyderabad the third blow in the 11th over. He stumps Saha. Saha scored 39 runs with the help of four fours and a six.

Kane Williamson did not play a big innings. He scored eight runs off the ball of Isuru Udana. Hyderabad's score was 87 runs when the fourth wicket fell.

After this Jason Holder and Abhishek Sharma added 27 runs for the fifth wicket.

Abhishek Sharma was out in the 14th over off Navdeep Saini but the holder remained frozen and scored an unbeaten 26 to give Hyderabad the victory.

Prior to this, the team of Royal Challengers Bangalore scored 120 runs for seven wickets in 20 overs. Bangalore's top scorer was Josh Philippi, who scored 32 runs. AB de Villiers scored 24 and Washington Sundar scored 21 runs. The rest of the batsmen could not do anything special. Captain Virat Kohli could score only seven runs.