Delhi Capitals defeated Sunrisers Hyderabad by 17 runs to make it to the final of IPL-13. Delhi team will compete against Mumbai Indians in the final on 10 November. 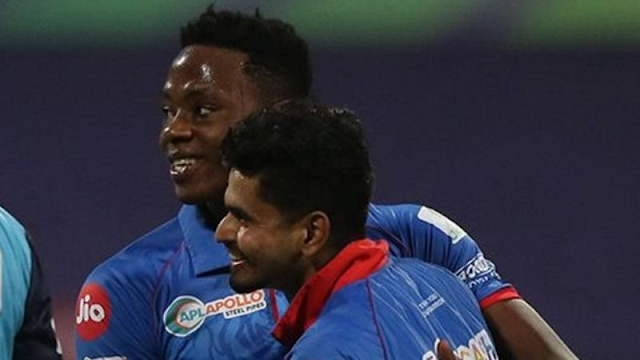 Delhi Capitals challenged Sunrisers Hyderabad for 190 runs in the second qualifier match played in Abu Dhabi. In response, the Hyderabad team could only score 172 runs for eight wickets.

Sunrisers Hyderabad did not start well. Captain David Warner, who is in good form, could not show the power of the bat against Delhi. Kagiso Rabada bowled him in the second over. Warner scored two runs.

After this, the second opener Priyam Garg and Manish Pandey added thirty-one runs for the second wicket. In the 12-ball innings, Garg, who hit two sixes, looked in rhythm but he could not make a big score. He was bowled by Marcus Stoinis in the fifth over. Priyam Garg scored 17 runs. Two balls later, Stoinis also dismissed Manish Pandey. Pandey scored 21 runs. When the third wicket fell, Hyderabad's score was 44 runs.

After this, Kane Williamson and Jason Holder added 46 runs for the fourth wicket. This partnership was broken by Akshar Patel in the 12th over. He got the holder caught by Praveen Dubey.

But Williamson stayed on the wicket. He completed the half century in the 14th over. Williamson along with Abdul Samad added 57 runs in 5.1 overs. The pair, who were finding it difficult for Delhi, were broken by Stoinis in the 17th over. He caught Kane Williamson in the hands of Rabada. Williamson scored 67 off 45 balls. He hit five fours and four sixes in his innings.

Hyderabad needed 42 runs to win in the last three overs. Rashid Khan hit a six and a four off R Ashwin in the 18th over. Total 12 runs scored in this over. Hyderabad had to score 30 runs in the last two overs to win.

Abdul Samad, the Hyderabad team's biggest hope in the last over, was dismissed by Rabada in the 19th over. He scored 33 runs in 16 balls with the help of two fours and two sixes. Rashid Khan was also dismissed on the next ball. Rashid scored 11 runs off seven balls. On the fifth ball of the over, Rabada dismissed Srivats Goswami. They could not even open an account.

Hyderabad were to score 22 runs in the last over. Enrique Norquia bowled in the 20th over. Hyderabad batsmen could score only four runs in this over.

Prior to this, Delhi Capitals scored 189 runs for three wickets in 20 overs. Shikhar Dhawan was the top scorer from Delhi. He scored 78 runs. Dhawan faced 50 balls. He hit six fours and two sixes in his innings.

For Delhi, Shimron Hetmyer scored an unbeaten 42 off 22 balls and Marcus Stoinis, who came for the opening, scored 38 runs.

The Hyderabad team's fielding was poor. Hyderabad players took several catches. Rashid Khan, Sandeep Sharma and Jason Holder took one wicket each for Hyderabad. Holders proved to be the most expensive bowlers. He spent 50 runs in four overs.