IPL 2020: Compete in Delhi and Hyderabad to reach final

Sunrisers Hyderabad defeated Royal Challengers Bangalore by six wickets in the Eliminator match in the IPL-13 playoff in Abu Dhabi on Friday. 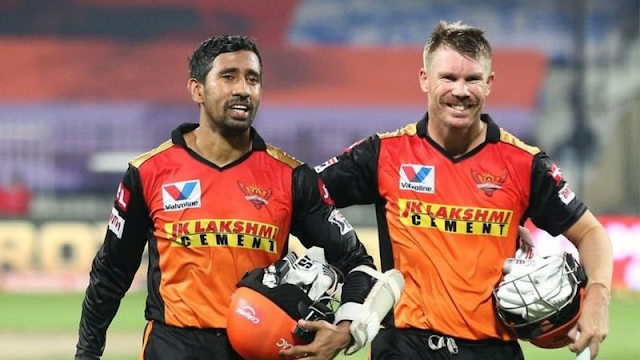 Even though Hyderabad achieved the target of 132 runs for the win with only two balls remaining, it can be seen that the match must have been very exciting, but in reality it was not so.

Hyderabad maintained its dominance over the entire period. Now Hyderabad will face Delhi in the second qualifier on Sunday.

Whichever team wins will face four-time champions Mumbai Indians in the finals on the 10th.

Mumbai is playing well, but given the way Hyderabad has won the last few matches, it can be said that winning from Hyderabad will not be easy.

Hyderabad are upbeat with consistent and impressive victories. Now the final will be talked about later but before that there will definitely be increasing lines of concern in the camp of Dabang Delhi.

Hyderabad has made it to the playoffs after seeing all the ups and downs. For this, he defeated the previous champion Mumbai by 10 wickets in his last league match.

Even though Mumbai did not get full strength in that match because Jasprit Bumrah and Hardik Pandya did not play then. But Mumbai has the option of every player, so just not playing them does not reduce the importance of Hyderabad's win.

With this win, Hyderabad not only secured the third position in the points table but also spoiled the game of Kolkata Knight Riders in the playoffs by removing all kinds of agar-points. She also advanced to third place ahead of Bangalore with a better run average.

Contest teams of the title were beaten continuously

Hyderabad also defeated Royal Challengers Bangalore by five wickets in a league match before Mumbai. Then Hyderabad first stopped Bangalore for only 120 runs for seven wickets in the prescribed 20 overs and then achieved the target of winning by losing only five wickets in 14.1 overs.

The target of victory was so low that even small scores like Wriddhiman Saha's 39, Manish Pandey's 26 and Jason Holder's 26 runs also won the match.

In fact, in this match, Jason Holder ended the worry of captain David Warner by hitting three sixes and a four off only 10 balls. Jason Holder plays with great vigor, and if a batsman comes to number six or five and plays such innings, then the opposing bowlers are under pressure.

Jason Holder did something amazing in the playoff eliminator match against Bangalore. He played in a fearless manner, in the last over of Navdeep Saini, with the help of two consecutive fours in the last over, he won the team with the remaining two balls, otherwise despite the low score many times, bad batting spoils the hard work of the bowlers.

Rashid Khan, Jason Holder and Sandeep Sharma bowled very economically against Bangalore. The amazing thing is that in the league match, Bangalore was stopped for 120 runs, but in the playoff also, Bangalore only allowed 131 runs.

This time too, it was Jason Holder and the rest of the bowlers. That is, two consecutive victories over Bangalore were not insignificant.

Delhi was defeated by 88 runs, both matches won in the league

Hyderabad had won a stunning 88-run victory against Delhi in the league match when the battle to join the first four teams was going on in the point table.

Mumbai was still at the top most of the time. Delhi was also swinging in second place.

Shikhar Dhawan's bat was on fire, so the Delhi bowlers were also in full swing. In such a situation, Hyderabad scored 219 runs against Delhi, losing only two wickets in 20 overs.

Captain Warner scored 66 runs by Wriddhiman Saha and Manish Pandey scored an unbeaten 44 to finish the eve of Rabada, Norkiye and R Ashwin. In that match, Rabada did not get a single wicket for 54 runs.

Actually, joining Wriddhiman Saha proved to be the turning point. Contrary to his nature, by batting smokelessly, cricket pundits were also forced to press their fingers under the teeth.

After this, Hyderabad bowlers tied Delhi's bundle for 131 runs in 19 overs.

Sandeep Sharma, Shahbaz Nadeem, Rashid Khan and T Natarajan's balls wreaked havoc. Not only this, Hyderabad had tasted defeat of Delhi by 15 runs in the first league match also.

Then Delhi could only manage 147 runs in reply to 163 runs to win, losing seven wickets. Then Bhubaneswar Kumar was also in the Hyderabad team.

So Hyderabad turned out to be such a hidden roost that beat Mumbai, Delhi and Bangalore, the contenders to become champions on a very easy look. Is this record not enough to consider Hyderabad a dangerous and surprising team?

Hyderabad's bowling is sharp and reliable

In the first qualifier in the playoffs, where Shikhar Dhawan, Prithvi Shaw and Ajinkya Rahane were unable to open their account against Mumbai, then captain Shreyas Iyer also failed.

The team's coach Ricky Ponting was seen talking to Rishabh Pant for a long time, whose bat was not seen as much as it should have looked, so in the bowling, Mumbai batsmen of Rabada and Norkiye beat fiercely.

In view of this, it can be said that Delhi will have to play against Hyderabad with very high morale.

Hyderabad captain David Warner has scored 546 runs in 15 matches so far this season. By the way, Shikhar Dhawan of Delhi has also scored 525 runs in 15 matches with the help of two centuries. But now if Hyderabad Amazing team is seen then one of the main reasons is its bowling.

In batting, David Warner is now playing in the style for which he is known. If Wriddhiman Saha is also fit then what to say? If Manish Pandey is playing well, Kane Williamson has proved to be the backbone. Jason Holder is the one to play taboo.

In such a situation, it is better to predict who will win in the competition between Hyderabad and Delhi and wait till Sunday.