The Indian government has strongly opposed the decision of Pakistan Prime Minister Imran Khan to grant temporary status of the province to Gilgit-Baltistan. 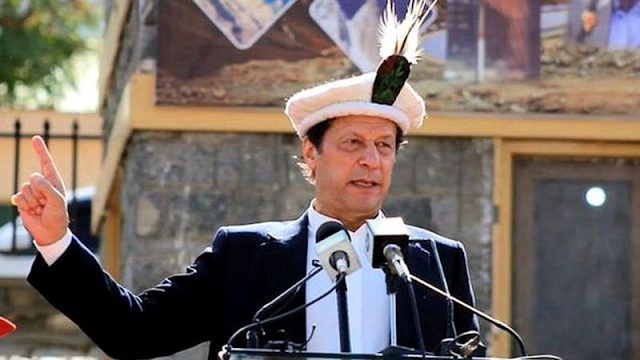 Indian Foreign Ministry spokesman Anurag Shrivastava has said that the Government of India rejects the attempt of the Government of Pakistan to bring illegal and forced physical changes in the Indian territory.

He said, "I reiterate that the so-called Gilgit-Baltistan region is an integral part of the Union Territory of Jammu and Kashmir of India legally and as per the 1947 merger agreement."

"Rather than seeking to change the condition of these Indian territories, we appeal to Pakistan to immediately evacuate all areas under its illegal occupation."

Earlier, Pakistan Prime Minister Imran Khan said that his government has decided to give temporary status of the province to Gilgit-Baltistan.

He said that "this decision has been taken keeping in mind the resolutions of the UN Security Council".

Imran Khan made this announcement while addressing the Independence Parade ceremony organized on the occasion of 73rd Independence Day of Gilgit-Baltistan on Sunday.

He said that "The Government of Pakistan has fulfilled the long-overdue dream of the people of Gilgit-Baltistan today. The youth of this region have wanted this for a long time. Congratulations to them. Along with this, we have given an economic package for the development of the region." Is also considered. "

However, Imran Khan did not give any information about this package nor did he say how long till Gilgit-Baltistan region would get the status of fifth province of Pakistan permanently.

On this occasion, Imran Khan remembered the people who sacrificed their lives for the freedom of this region.

At the same time, he also praised the role of Pakistan's security forces in this area to fight extremism.

Imran said, "Modi government believes only in the idea of ​​Hindutva and innocent Kashmiri people are persecuted on the basis of that ideology."

"For the progress and prosperity of Pakistan, it is very important to have a strong law and order and those who want to give a bad credit to Pakistan's army and Pakistan's judiciary, they do not want to give any credit, they are speaking the language of Modi."

Through this comment, he tried to target those opposition leaders who have recently criticized his government and some institutions.

Referring to the Gilgit-Baltistan region, Imran Khan said that "his government is focusing on the development of all the backward areas of the country".

On this occasion, the acting Chief Minister of Gilgit-Baltistan Mir Afzal Khan was also present with Imran Khan. He also praised the Pakistani army and called this decision of the Government of Pakistan important for the development of Gilgit-Baltistan region.

Speaking on the occasion, Gilgit-Baltistan Governor Raja Jalal Hussain Makpoon said that "The present Government of Pakistan is making serious efforts to mainstream the Gilgit-Baltistan region which is very important for the coming generations here."

However, critics of Pakistan's Imran Khan government say that this announcement has been made keeping in mind the elections to be held on November 15, which is why the people of Gilgit-Baltistan region are not going to get it Gone.

India has been opposing change

When such news came from Pakistan for the first time in September about the Gilgit-Baltistan region, India criticized it.

India has always opposed any change in Pakistan-administered Kashmir and Gilgit-Baltistan region.

In July, when Pakistan had said that it would hold elections in the region, Indian Ministry of External Affairs spokesman Anurag Shrivastava said, "We completely reject Pakistan's efforts to bring about material changes in the Indian territories of Jammu and Kashmir and Ladakh." "It is nothing more than a show of trying to hide the Indian territories that Pakistan has occupied."

After the first Kashmir war in 1948, the disputed real border line was drawn between India and Pakistan. Before that Gilgit-Baltistan was a part of the erstwhile princely state of Jammu and Kashmir.

Historical accounts state that an officer of the British Army, who was the field head of a paramilitary force called the 'Gilgit Scouts', helped Pakistan in October 1947 to gain control of the region.

The region has a population of about 1.5 million people who are ethnically different from Kashmiris.

But the strategic position of the region makes it more desirable for any country.

The borders of four countries including India, Pakistan, China and Tajikistan touch this region.