After chasing Australia's huge score of 374 runs, India could score only 308 runs in 8 overs in 50 overs. With this, India lost the first ODI played in Sydney by 66 runs. 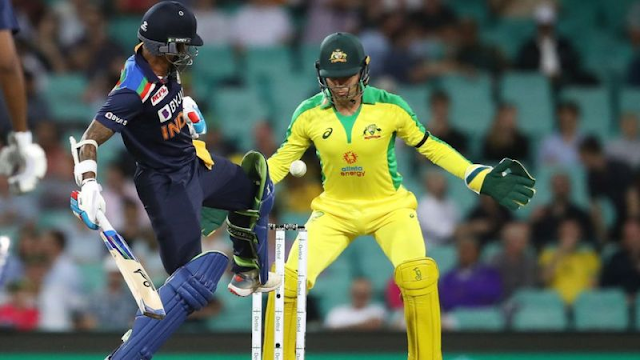 Hardik Pandya scored the highest 90 runs (76 balls) for India, while Shikhar Dhawan scored 74 runs from 86 balls. Apart from these two, no Indian batsman could do anything special.

Shikhar Dhawan and Hardik Pandya handled India's innings after a poor start, but even then the pair of both could not lead India to success. Navdeep Saini 29 runs and Jasprit Bumrah remain unbeaten on zero.

While captain Virat Kohli scored 21 runs off 21 balls, Mayank Agarwal could contribute only 22 runs in 18 balls in India's innings.

Adam Jampa and Josh Hazlewood were the most successful bowlers for Australia. Adam Zampa took 4 wickets and Hazlewood took 3 wickets.

Earlier, in the first ODI match being played between Australia and India in Sydney, Australia batted first and set a target of 375 runs in front of India. For Australia, batsman Aaron Finch scored 114 runs and Steve Smith scored 105 runs.

Smith scored the 10th century of his ODI career. He scored this century off 62 balls. Smith scored 105 off 66 balls with the help of 11 fours and 4 sixes.

Thanks to the century of these two batsmen, Australia scored a huge score of 374 runs on the loss of six wickets in 50 overs. Apart from this, Glenn Maxwell played a blistering innings of 45 runs for 19 balls.

David Warner scored an innings of 69 off 76 balls. While Alex Carrie returned unbeaten after scoring 17 and Pat Cummins 1, Marcus Stoinis could not open his account and Yajuvendra Chahal took his wicket.

The Indian team has appeared in New Jersey in this limited overs competition. This jersey is reminiscent of the team jersey during the 1992 World Cup.

The Indian team landed in the cricket field after exactly 269 days. With this match, the series of three ODIs, three T20s and four Test matches has started.

The series is starting in the strict provisions of quarantine in Australia due to the Corona epidemic.

The Indian team had to remain quarantined for 14 days before the series started. Apart from this, the team has to stay in the bio bubble setup. But the special thing is that a limited number of viewers are also present during this series.

India won the T20 series against New Zealand in February before the Corona era.