Fastag was made mandatory for new four wheelers from the time of registration. The vehicle manufacturer or their dealers were entrusted with the responsibility of supplying it. 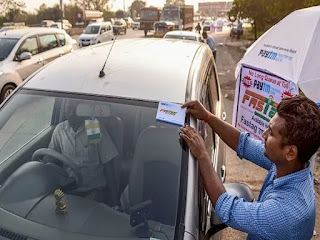 The government has made FASTAG mandatory for four wheeler vehicles purchased before December 2017 from January 1 next year. Fastag was made mandatory for new four-wheelers from the time of registration and the vehicle manufacturer or their dealers were entrusted with the responsibility of supplying it. It was mandated that the fitness certificate be renewed only after the fit of fastag for transport vehicles.

Apart from this, the fit of fastag has been made mandatory for national permit vehicles from 1 October 2019. Now it has been made more mandatory. Now a valid fastag is mandatory while obtaining new third party insurance through amendment of form-51 i.e. insurance certificate, in which details of fastag id will be captured. This rule will be applicable from next April 1, these rules will also be applicable to old four wheelers.

It can be said that this notification has been issued to ensure that the fee payment on toll plaza is 100 per cent through electronic means and that the vehicle passes through the plaza uninterruptedly. There will be no waiting time at the plaza and this will save fuel.