Despite being the champion of Mumbai Indians, there was a huge loss, know why Prize Money got half

The team of Mumbai Indians won the IPL title for the fifth time. But after becoming the winner due to Kovid 19, the team has suffered heavy losses. 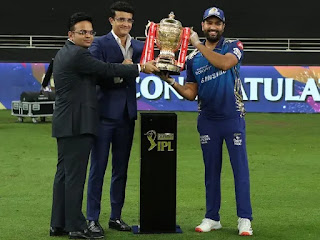 In the 13th season of the IPL, Sunrisers Hyderabad were placed at the third position, while Virat Kohli's Royal Challengers Bangalore had to settle for fourth place. Both these teams got Rs 5-5 crores as prize money.

Due to Corona virus, BCCI had to face a lot of problems in organizing the IPL this year. Due to Kovid 19, not only was there a delay of 6 months in organizing the tournament, but also due to the entry ban of spectators on the field, the earnings from IPL were also reduced.

Apart from this, Vivo retracted from the title sponsor of the IPL due to a dispute with China in June-July. BCCI got a new title sponsor in the form of Dream XI, but Dream XI paid BCCI 200 crores for a season, compared to Vivo paying Rs 450.

Due to all these losses, the BCCI announced a 50 percent reduction in prize money this year. Earlier, the team that won the IPL title got Rs 20 crore, while the runners-up got 12.5 crore. Teams of the number three and four came to the account of 10-10 crores.