Bihar Election 2020: Five candidates for CM post in Bihar, who will be the Chief Minister?

Voting is going on today for the second phase of Bihar assembly elections 2020. There are a total of 243 assembly seats in Bihar. This time there are five main contenders for the post of Chief Minister in the state. Let us know about them. 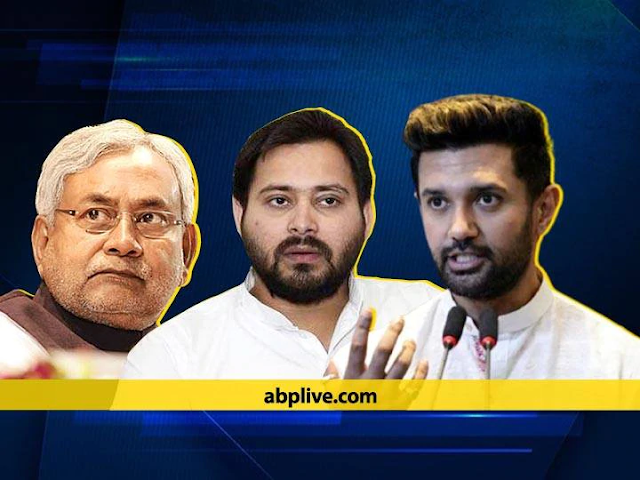 Bihar is the first state in the country, where assembly elections are being held during the Corona epidemic. The state is going to vote for the second phase today. In this election, half a dozen leaders are contenders for the chief minister's chair. Let us know which candidates are filing a claim for the Chief Minister.

Nitish Kumar- Nitish Kumar is once again the face of the Chief Minister from the NDA alliance, has been holding the throne of the state for the last fifteen years. Nitish Kumar is trying to become the Chief Minister by winning the election for the fourth consecutive time, he is counting his achievements from the electoral stage. Despite his long tenure, he is saying in his meetings that if he gets the chance again, he will complete the remaining work and make Bihar a developed state. Nitish is reminding the voters of the days of Jungle Raj that they are peace and relaxed in Bihar because of their government.

Tejashwi Yadav - The RJD leader Tejashwi Yadav is the candidate for the Chief Minister from the Grand Alliance of the Opposition, playing in this election so far like a determined political player, he is constantly attacking Chief Minister Nitish Kumar for unemployment and plight. He has promised to give jobs to 10 lakh youth in the first cabinet meeting as soon as the government is formed. Tejashwi is addressing more than a dozen meetings in a day, if he manages to become the Chief Minister, he will be the youngest CM.

Chirag Paswan - There is also a strong buzz about Chirag Paswan, the president of LJP, who is contesting from the NDA. Chirag, who entered the election battle with the slogan "Bihar First, Bihari First", is speaking out fiercely against Nitish Kumar. Chirag, the aggressor against Nitish, is soft against the BJP and he has been vocal about his relationship with PM Narendra Modi. In such a situation, it is believed that Chirag has also put his claim to the post of Chief Minister, although he refuses to consider himself as a CM candidate.

Pushpam Priya Chaudhary- Pushpam Priya Chaudhary, who came from London, is talking about developing Bihar on the lines of Europe. She came in the headlines by giving advertisements on the front page in the newspapers of Bihar. Pushpam Priya, who describes herself as a contender for the post of Chief Minister, has openly challenged from Nitish to Tejashwi. Pushpam Priya is a big hit on social media, she has become the entry-taking leader as the biggest sensation of Bihar election.

Upendra Kushwaha- RLSP has formed an alliance with Mayawati's party BSP and Asaduddin Owaisi's party AIMIM. Upendra Kushwaha is the face of the Chief Minister of this alliance. Kushwaha has entered the electoral battle by giving the slogan of "government with education this time." Kushwaha is constantly attacking Nitish Kumar and Tejashwi Yadav. They are repeatedly saying that for 15 years their and 15 years have been ruined by them and Bihar, so this time give the government with education.

Now it has to be seen who will be the chief minister out of these six contenders. Will the appearance of today's politics change, will a new alliance change after the election, will a new face take over as CM? Or Nitish Kumar will take over the throne again, will have to wait till November 10 to answer these questions.