For several months, there has been talk in diplomatic circles that there has been a "policy change" in Pakistan's foreign relations and now Islamabad is tilting towards Turkey. 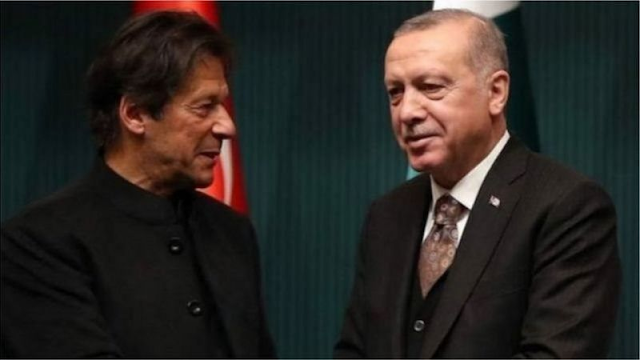 It is also going on that Pakistan is now giving priority to Turkey over Saudi Arabia.

This perception has been fueled by the news and trends which have been trending on social media for the last few weeks. Some of them were based on fake news. The Pakistan Foreign Ministry itself had to come forward to deny it.

On the day of the recent FATF meeting, there was such a news that Saudi Arabia had opposed Pakistan in the voting process. When this trend intensified and the debate started, the State Department had to clarify it by giving a statement.

Subsequently, on the occasion of Kashmir Day, when it was reported that Pakistani Embassy in Riyadh has been banned for holding Kashmir Day celebrations, Saudi Arabia once again started trending on social media. And now the latest situation is that the issue of Saudi currency has arisen.

Saudi Arabia recently issued a new currency note of 20 riyals, in which the country's G20 presidency has been highlighted.

On the other side of the same note, a map of the world has been printed, in which Kashmir and Gilgit-Baltistan were not shown as part of India, on which Pakistanis were happy.

But soon many Indian news channels and social media users said that these areas have not even been shown as part of Pakistan on the map.

This step reflects India's official position on the issue of Kashmir and Gilgit-Baltistan in both countries. It was praised in the Indian media but it was not taken very warmly in Pakistan.

How do Turkey and Saudi Arabia have relations with Pakistan? It may not be a big deal for Turkey or Saudi Arabia, but for Pakistan these relations are very important.

What is the reason for the distances

Saudi Arabia has moved several times for the financial assistance of Pakistan. But experts say that in return, Pakistan has to put Saudi Arabia at the forefront of its foreign policy priorities. On many occasions, Saudi interference in the 'micro management' of this foreign policy also began to appear, which is clearly no longer acceptable to Pakistan.

However, observers also believe that due to apathy in Pakistan and Saudi Arab relations, Pakistan does not have a relationship with Turkey, Iran or any other country. Rather, they are "issues" on which Pakistan expected Saudi support but did not get support.

Talked to the former ambassador and foreign affairs experts about this and tried to understand whether the inclination towards Turkey was a unique thing or an evolutionary change in foreign policy.

According to former foreign secretary Shamshad Ahmed, Pakistani people are already in opposition to some decisions in Saudi Arabia. Such as Saudi Arabia's support to India on Kashmir issue or not supporting Pakistan's side as expected.

On the other hand, they believe that the signs of support from Israel are also reducing the confidence of Pakistani people in Saudi Arabia.

According to senior journalist and analyst Naseem Zahra, it is not that Pakistan has changed the relationship with one stroke. Rather, the country will try its best to ensure that the basic relations that are there are not affected at all. As far as military relations are concerned, there has been no change in them yet and neither will be in the near future.

They believe that relations with Turkey are progressing naturally. They have nothing to do with existing relations with Saudi Arabia and neither should it.

Nasim Zahra says, "There could be religious, historical, cultural, tourism and many other reasons for improving Pakistan's relations with Turkey. So it is only natural that in the presence of all these factors, with Turkey, Relations should be stronger. It is wrong to say that relations with Saudi Arabia are deteriorating due to strong ties with Turkey. "

Nasim Zahra said that the reason for the change in relations with Saudi Arabia is something else. He said, "Every country has different interests. Saudi Arabia has the right to give preference to India or any country in the region. Pakistan also has this right.

According to him, "For the first time such a situation has arisen that Pakistan is trying to develop its economy using its geographical location and it is not a matter of one year. This has been the way of Pakistan for the last few years. . This has led to an improvement in the situation in Afghanistan and the overall change in the region is due to this. "

Earlier, while speaking with the BBC, analyst Rashid Hussain, who has a keen eye on Saudi Arabia's affairs, said that the relationship has not changed suddenly but "the pressure has been increasing for many years."

He adds links to this pressure since the year 2002, when the then Indian Foreign Minister Jaswant Singh visited Saudi Arabia.

At that time, "using economic diplomacy, he was able to crack the relations between Saudi Arabia and Pakistan".

Rashid Hussain says that Saudi Arabia started looking at the affairs of the region from a Pakistani perspective rather than from a new perspective. Thus began a new phase of relations between Saudi Arabia and India. In which the interest and relation of Pakistan  Did not even mention it.

It is not over here! The United Arab Emirates warmly welcomed India's Prime Minister Narendra Modi. After this, Saudi Arabia also invited Narendra Modi to visit his country and gave the highest honor to strengthen relations between India and Saudi Arabia.

After this, the attitude of the Organization of Islamic Countries (OIC) became the cause of increasing tension in the relationship. When the organization expressed reluctance to call a meeting of foreign ministers against the demands of Pakistan.

This tension came to the fore when Shah Mahmood Qureshi lashed out at Saudi Arabia for not calling an OIC meeting on Kashmir.

According to media reports, following this statement, Saudi Arabia had announced that Pakistan paid the three billion dollar loan to Pakistan in 2018, ahead of time.

After this reaction, the bitterness increased so much that Army Chief General Qamar Javed Bajwa was sent to Saudi Arabia for talks.

Then Dr. Ali Awaz Asiri, former Ambassador of Saudi Arabia to Pakistan, wrote in an article published in Arab News, "Comparing Pakistan's relations with Saudi Arabia based on mutual love, religion, culture and social values. Cannot be done. These relations are above the change of personality and governments in both the countries. "

However, the former Saudi ambassador called Pakistan's foreign minister's statement a "dangerous suggestion" that "if Saudi Arabia did not convene a meeting of the Foreign Ministers of the Organization of Islamic Countries (OIC) on Kashmir, then Pakistan would parallel this organization Can call another organization meeting. "

Asiri wrote in his article published in Arab News that, if this suggestion of Foreign Minister Qureshi meant to organize another meeting like Kuala Lumpur, "This is a dangerous idea. Not expected from a brother country." Can. "

Former Ambassador Shamshad Ahmed believes that Saudi policies are opposed even within the royal family itself and Pakistan cannot support these policies and every country has its own foreign policy.

According to senior journalist Amir Zia, not only anti-Saudi rhetoric has surfaced on social media in recent times but wrong or misleading content is being spread here on the basis of linguistic and sect. Efforts are being made to incite such issues.

Amir Xia further said that relations between Pakistan and Saudi Arabia had soured once or twice in the past. "But it is clear that Saudi Arabia is one of the main pillars of Pakistan's foreign policy."

According to Amir Zia, both Turkey and Saudi Arabia are very important for Pakistan.

He says, "The specialty of diplomacy should be to have good relations with both countries. Relations with Pakistan are also important for Saudi Arabia. Even small matters should be made a 'Mount of Rye' that a ceremony Not allowed to be held, etc. As far as people are concerned, Pakistan's people are very sincere in their attitude towards the people of both Turkey and Saudi Arabia. "

Talking about the Kashmir issue, Amir Zia said that every country adopts proximity or distance in diplomatic relations based on its own interests. In this case, the thinking of Pakistanis is based on emotions rather than realism.

He says, "Realism is that every country sees its own interests. The issue of Kashmir was very important for Pakistan. On this the support of Saudi Arabia to India was probably unbelievable for Pakistan and OIC's support on Kashmir issue. , Pakistan was right in this case. That is why Pakistanis are angry with Saudi Arabia on this issue. "

He said that it is not acceptable that 'micro management' of Pakistan's foreign policy should be done because it is against the interest of our country.

According to Nasim Zahra, there are many factors to change the nature of a relationship. There are many such factors in Saudi Arabia's relationship with India, the case of Yemen and then the expectations from Pakistan itself.

Nawaz Sharif never let Saudi Arabia get angry. But now Imran Khan and especially the armed forces of Pakistan also feel that now everything has come very close to their own home. Whether it was against Iran or the war of Yemen, Pakistan needed to set a border.