America Election: What will happen to China if Biden wins?

On October 22, during the third presidential debate between Donald Trump and Joe Biden, the moderator of the debate asked Joe Biden how he would punish China for not showing transparency on the Corona virus. 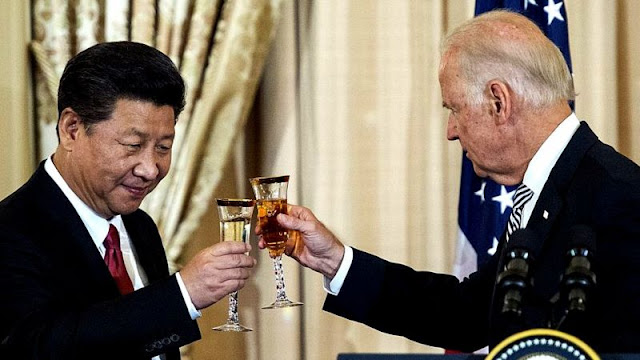 President Donald Trump has been accusing China of hiding information related to the corona virus and allowing it to spread worldwide. China has been rejecting these allegations.

Corona virus has killed more than 2,30,000 people in the United States. The American economy has also suffered heavily.

Professor of International Affairs at the University of Delaware, USA, Mukhtar Khan considers this statement as misleading.

He said, "Even before the debate, foreign affairs experts were of the opinion that Biden is weak about China."

Trump has been accused of trying to woo China initially and following the Corona virus, he followed a one-sided policy of sanctions and executive orders.

Professor Khan says, "China is not only challenging American supremacy but is also challenging international rules and order. If we look at Biden's statement, it would seem that China is a rule-abiding country and should be encouraged. '

According to Mukhtadar Khan, which is a weak aspect of Biden's foreign policy, he is reluctant to take action on China.

Relations between the US and China have declined on many issues. For example, China's stand on the Corona epidemic, technology, Hong Kong, trade, South China Sea, Weigar Muslims, Ticketock, Khwai, espionage and cyber threats.

According to a Pew (Pew) research, two-thirds of Americans have negative views about China.

But it is not clear yet whether aggression on China will get votes or not, even when there is no shortage of domestic issues.

China has been mentioned 33 times in the US National Security Strategy released in 2017.

In a speech to the governors of the provinces in February, US Secretary of State Mike Pompeo mentioned the potential dangers presented to China.

He had said, "China has analyzed our weaknesses. It has decided to take advantage of our freedoms so that it can overtake us at the federal level, provincial level and local level. ''

The Trump administration has launched a global campaign to mobilize support against China. Trump has been repeatedly saying that Biden is soft about China.

If Biden becomes president then what will be his stand? Will Biden, like Trump, be able to impose more taxes on Chinese businesses and take other steps? How will they deal with China on the issues of business, human rights, climate change, Hong Kong and Coronavirus?

A video has been released promoting Trump's election campaign, with Joe Biden hitting glass with Chinese President Xi Xinping, saying, "It is in our interests to prosper China."

In April in an article on foreign policy, Joe Biden emphasized that America needs to take a strong stand on China.

Biden's vision document states, "In order to stay ahead in the rivalry against China or any other country in the future, we must intensify our newness and unify the economic power of democratic nations around the world." '

Some would say that this could be a broad framework for a policy of multilateralism, unlike Trump, but where are the details?

Professor Khan says, "The attitude in Trump's administration was that the United States had accepted China as a rival, but Biden is not accepting it at this time."

Biden is a critic of China, but there is a view that he also accepts the weakness of America. There is also a view that it is too late in America's policy to control China.

If we look at the graph of the relationship between the two countries, what are the interesting things?

President Richard Nixon's visit to China in 1972 lifted snow on relations between the two countries.

America wanted China to be a country that is connected and responsible around the world. But experts believe that China has made itself a strategic competitor of America on the strength of its huge economy.

"The way we are managing China is better than the way China is managing us," says Michael Pillsbury, author of the book The Hundred Years Marathon and former Puntag official.

The cover of this book reads - China's secret strategy is to replace America as a global superpower.

'China does not want to replace America'

James J., a foreign affairs expert associated with the Heritage Foundation, a Washington-based think tank. Carafano says that over the years, America's strategy is to increase cooperation by eliminating disputes with China.  She is

This strategy of America has backfired during the period of President Trump.

Carafano says, "Now America's strategy is to solve problems and not ignore them, and show that we intend to protect our interests."

Carafano says, "Even if there is a new president in America after January 2021, there will not be much change in America's strategy for China."

But will the US continue Trump Trump's aggressive offensive or will Biden's leadership adopt a more diplomatic and nuanced approach?

"Some people in Washington are crazy about China. China wants to become one of the world's superpowers and not replace America and replace it," says Zhikun Zhu, professor of international politics and relations at Bucknell University.

What options do India and Pakistan have?

Traditionally Pakistan has had a strong relationship with America but now it is closer to China.

Dr. SMM Ali of John Hopkins University believes that on the Pakistani side it is being understood that instead of keeping everything with China, the relationship that has been going on with America for the last 70 years should not be sidelined.

He says, "America also cannot leave Pakistan like this because Afghanistan has become an issue of respect for it too."

India has always been proud of its non-aligned foreign policy, but some people may argue that India has been in the Soviet camp.

India has tried to balance its relations with China and America. But after the death of its soldiers in violent clash with China in Galvan Valley, India has not shown any hesitation in coming close to America.

Carafano admits that the US does not see China as a threat to its existence, but India has moved beyond the era of non-alignment.

He says, "India is now an anti-China force in the world." However Professor Zhu's views are contrary to this.

He says, "India's foreign policy has been independent since the beginning. He was an important leader in the Non-Aligned Movement. I think India should stay on this path.

The next steps in this diplomatic maneuver have to be taken very thoughtfully.

Professor Aidan Milliff of MIT's Department of Political Science says, 'S. Jaishankar has said that India will always choose its side ... If this is a rhetoric, it is a part of India's long and strong tradition of raising voice for its freedom. ''