Why is China angry about India's trade deal with Taiwan?

The conflict that has arisen in China's relations with its neighbors has brought some countries together. India and Taiwan are also two such countries. 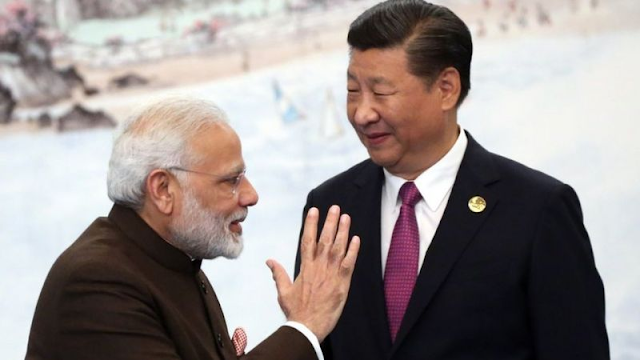 India has been in serious dispute with China over the last few months on the Line of Actual Control (LAC) in Ladakh.

Here the armies of both the countries are standing face to face and despite negotiations at diplomatic and military level, no solution has been found so far for this problem.

Opposition leaders in India including Congress's Rahul Gandhi allege that China has violated the Indian border and its forces have penetrated deep into the Indian part of Ladakh.

Opposition leaders are making strong allegations against the Modi government at the Center for failing to drive out Chinese forces and hide the truth from the people of the country.

India has taken several retaliatory measures in the last few months, in view of the refusal to accept the demand to establish the pre-Chinese status quo and the persistent aggressive attitude.

The Government of India took military-level steps such as the rapid deployment of forces in Ladakh, the strengthening of its logistics and other preparations, the construction of roads and bridges in the border areas in order to keep the armies of both countries face to face for long Huh.

On the other hand, India is also trying to shock China at the level of diplomacy and trade. Under this campaign, Chinese apps have been largely banned in the country. Chinese companies are being discouraged in infra and other tenders. It is no longer easy for Chinese tech and telecom gear makers to work in the Indian market.

India's move to compete with China

India has increased partnership with the US, Australia and Japan at a diplomatic level to compete with China.

Apart from this, an important sign is to strengthen the relations between India and Taiwan.

China's relations with Taiwan are also in a tense period. China does not see Taiwan as a separate country. On the other hand, Taiwan considers itself a separate universal country.

This confrontation with China has brought Taiwan and India closer. According to some reports, the Narendra Modi government is looking to make a trade deal with Taiwan.

"There is no harm in trade agreements. Such agreements are beneficial for both countries. Taiwan has trade agreements with many countries in the world," says Dr. Prabir Dey, Professor of Research and Information Systems for Developing Countries (RIS). The same can happen with India. "

However, they say that a general trade agreement can be made between the two countries. However, Taiwan cannot enter into a Free Trade Agreement (FTA) with any country.

What kind of trade agreement can be reached with Taiwan?

Even though Taiwan has become a member of the WTO, but no country can FTA with it.

Dr. Dey says that Taiwan has started doing Economic and Trade Cooperation Agreement (ETCA) with the countries of the world to get its cut. Under this ETCA, trade can be done with other countries in every sector.

Dr. Day says that nobody in India is saying what kind of trade agreement is going to be with Taiwan. He says, "Because of course it won't be FTA."

However, amid tensions over the Line of Actual Control and deteriorating India-China relations, a large section feels that this could not be a better time to strengthen relations with Taiwan.

However, no Indian agency has confirmed the negotiations between the two countries regarding the trade deal so far. But there has definitely been a comment on this matter from the Foreign Ministry of China.

China's Foreign Ministry spokesman Zhao Lijian has said, "There is a general consensus in the international community on the One-China Principle which includes India. The same principle also serves as a political foundation for developing relations with any other country of China. Does. "

Recently, the Chinese Embassy in India had advised the Indian media not to congratulate Taiwan's National Day. On this, there was a strong response from the Ministry of External Affairs of India, in which it was said that the Indian media is free to print any appropriate news.

The reason for Taiwan's increasing proximity to India

"Both India and Taiwan look at the tensions with China as an opportunity," says Jabin Thomas Jacob, associate professor in the Department of International Relations and Governance Studies at Shiv Nadar University.

Says Jacob, "It has recently been seen on the occasion of Taiwan's National Day as well."

However, it has been decided to negotiate between India and Taiwan regarding the trade agreement, but the picture has not been cleared on this.

The trade agreement will prove beneficial for both the countries. Taiwan's efforts to get more investment in sectors such as technology and electronics can help with Taiwan.

Also, this will reduce India's dependence on Chinese imports. Recently, the Indian government also invested in Taiwan's Foxconn Technology Group, Wistron and Pegatron  Is approved. These three companies want to invest around Rs 6,500 crore in India.

India wants to get an investment of Rs 10.5 lakh crore for smartphone production in the next five years.

Taiwan also wants to strengthen its relations with India so as to reduce its economic dependence on China.

Dr. Prabir Dey says, "All the rich people and big technology businessmen in China are Taiwanese. There are big capital and technology giants in Taiwan. Taiwanese company Foxconn does big business in India."

India stopped FDI from neighboring countries a few months ago. Its direct target was China.

Dey says that Taiwan is benefiting in this way. "Hong Kong companies are also investing in India," he says.

India and Taiwan signed a new bilateral investment agreement in 2018. According to the Commerce Department, in 2019, the trade between the two countries increased by 18 percent to reach $ 7.2 billion.