US presidential election: Trump and Biden clashed over Iran, China and Corona

The second and final debate took place on Friday morning between the incumbent President Donald Trump and his rival Joe Biden before the presidential election (Indian time).

The debate in Nashville began with the post-Corona virus situation. Joe Biden said that the Trump administration had failed to handle the situation created by the epidemic. 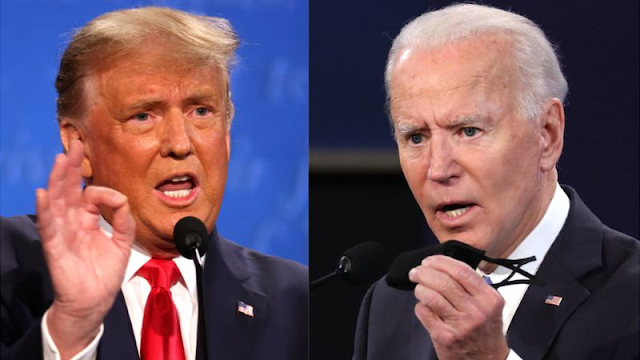 On how to compete with this pandemic, Trump said, "The surge of corona virus cases in the country is over now. It will be gone soon in other places. We will have its vaccine in a few weeks . Our army will take it to the people. "

Trump emphasized that this epidemic is a global problem. He said, "I am saying from my experience ... I had it and I have been cured of this disease. Kovid-19 is ending."

He said, "I say we have to live with this, we don't have a choice. We who like Biden can't lock ourselves in the basement (Biden laughs). They have the ability to shut themselves down. I can't, obviously Biden has made a lot of money from somewhere. He has these money to live in the basement. But people can't do it. The corona virus has cured 99.9 percent of the youth. 99 percent of the people We get it right. We have to overcome this and we cannot keep the entire country closed. If we do this, it will not be good in the national interest. "

Biden said, "Trump says that we have to learn to live with it. But people are learning to die. You will keep a chair in your house empty at the kitchen table in the morning. The man or his wife will go to bed today. Have been, habitually try to touch each other. Then they will realize that their partner has passed away. Learn to live with it? Hey ... (even at the age of 19) People are dying with it. It is dangerous and you say that I do not take any responsibility. "

Biden said, "Two million more deaths are expected in America by the end of this year. If we keep wearing this mask, we will save the lives of about one lakh people. But our President has no comprehensive plan for it. . "

Presidential candidate Joe Biden from the Democratic Party said, "It should be ensured that everyone is encouraged to wear masks. It must be ensured that the testing is speedy. A national policy to open schools and businesses Be fixed. "

Regarding the attitude of the US government on the Corona epidemic, Biden said that one of the world's best medical journals recently described President Trump's response to the matter as tragic.

Will China pay for the Corona virus price?

Biden was asked how he would punish him for the first case of corona virus coming to China.

Biden spoke of trade and finance instead of the Corona virus and said, "I will go with China according to international rules."

In response to this question, Trump said, "First of all, let me tell you that China has to pay it. They are playing with millions of dollars of our farmers."

In between, Biden said, "With the tax payers money." And that fund from USA

Is not coming from china

Trump and Biden differ on Afghanistan

Biden called the leaders of North Korea, China and Russia "thugs" and accused Trump of "embracing them."

Biden said Trump's relationship with Russian President Vladimir Putin has been unusually close and has been a source of trouble for many.

During the debate, the two leaders were also questioned about America's role in the struggle on foreign land.

On one hand, Trump has access to the nuclear button, but during his tenure he has not moved towards any nuclear war and as president he has remained relatively restrained. In such a situation, most people believe that they do not want Americans to be involved in any foreign conflict.

On the contrary, Biden believes that the US military should have an important role in Afghanistan and if he becomes president, there is a possibility that he will keep the US army there for longer than Trump.

"Russia does not want me to win the election"

During this time, questions were also asked about the information of American voters with Iran and Russia.

Biden said, "If I become president, the external forces who conspired to interfere in the election will be taught a lesson. I know that Russia, Iran and China are trying to interfere. Russia does not want me to win the election. Today I Never took money from any foreign company. Trump has stolen tax. His bank account is in China. "

Trump said, "There has hardly been any other president as strict as I have been on Russia."

There was also talk of Donald Trump paying only $ 750 tax. To this, Trump said, "I have given millions of dollars in advance tax but people only talk about paying $ 750 tax."

In this last debate, Trump also took the name of India. He said that the record of India, Russia and China in the fight against climate change is poor.

Trump said, "We have made many rules. I know more about clean air than Biden. America has the lowest carbon emissions. Look at India, China and Russia, they have made the air worse. They are fighting it." Records are degrading. "

Biden said, "Climate change is a big issue but Trump takes it for granted when it threatens the whole of humanity. We have prepared a plan on this. Jobs will also be provided through this. We focus on renewable energy instead of oil energy Want to do. "

What both candidates said on healthcare?

Biden said, "Trump has refused to implement the Obamacare Health Bill further, but he is not even telling what will be replaced. He has no plan. We spend $ 70 billion on it over the next 10 years will do."

Trump said, "I never refused to implement Obamacare, but I promise we will bring a better bill that will cost less than Obamacare. Medicines will be cheaper as well. That much can be said right now, not much information I can give.

The last debate between Donald Trump and Joe Biden was moderated by NBC News journalist Christine Welker. There have been many reactions on social media regarding his excellent conduct. In which people are telling him the real winner of this debate.