US President Election 2020: Trump will break 28-year record if he loses to Biden

If this happened, he would be the first president after George Bush Sr. in 1992 who could not get a second term. Bush Sr. was also a Republican. Senior Bush lost the 1992 election after one term. After that, Democrat Bill Clinton, Republican George Bush and Democrat Barack Obama have been president for 8-8 years. Trump has completed his four-year term. 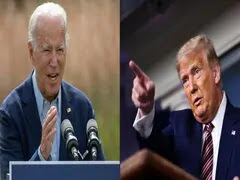 Biden will repeat 32-year-old record if he wins

If Biden wins the 2020 election, then Kamala Harris, nominated for the post of Vice President by her, will also make history. Kamala Harris will be the first woman of Indian origin to reach this stage in American politics. Harris is currently a California senator.

Democrat candidate Bill Clinton won the presidential election after 12 years defeating Bush Sr. In the Monica Leniewski episode, Clinton was impeached in 1998, escaping the party's majority in the Senate.

George Bush Jr., governor of Texas, was president from 2001 to 2008. The winner was decided by the Supreme Court several weeks later in the electoral battle with Al Gore, who was the vice president in the Clinton regime. Despite the biggest terrorist attack on 11 September 2001 in the US, Bush also won the 2004 election.

In the midst of the economic recession of 2008, America got its first black as President Barack Obama. He defeated Republican John McCain. In 2008, Obama and Vice President Biden also won.

Republican nominee Donald Trump, who came from business to politics, recorded an unexpected victory in 2016. Democrat Hillary Clinton also lost by getting more than 2.9 million votes from Trump. Hillary's dream of becoming the female president of America broke. The campaign of America First's trump was liked by the public.