US Election: For which party the people of India and Pakistan are campaigning together?

It was on 14 December 2012, when it was reported that a gunman killed many children and adults at Sandy Hook Elementary School. This news had put everyone in the can.

Indian-American Shekhar Narasimhan was at a party at the White House at that time, but his mood was disturbed upon hearing this news.

Shekhar recalls the incident, "The matter was not given much attention and was suppressed in a way. We were all sitting there."

For the first time, he met a Pakistani-American Dilawar Syed.

According to Dilawar Syed, a technology entrepreneur from California, "Our feelings were the same. I felt a person who was South Asian American and who was as passionate as I was."

After this meeting, both of them started AAPI Victory Fund.

This is a campaign started with the intention of activating Asian Americans and people of the Pacific region (AAPI) in the national and regional politics of America.

The percentage of registering and voting as a voter in this community is less than the national average.

Shekhar Narasimhan is an investor banker and is an advocate of diversity in the AAPI Victory Fund Board.

Shekhar Narasimhan explains, "The main reason for working with Dilawar was that he came from another part of the country and he was a good friend of many people who knew me. Also he had people from different areas. With the network that I don't have. "

In the month of January, the AAPI Victory Fund announced Joe Biden's support for the US presidency.

According to an estimate, more than 20 million Asian Americans and Pacific people live in the United States. This number is more than 6 percent of the entire population.

Dilawar and Shekhar believe that Joe Biden will lead a 'more equitable and equitable America' as US President.

Both have campaigned for Joe Biden. They have held virtual meetings and sent messages in their favor to the people.

Dilawar Syed has worked in the White House Commission. He says, "It was not that we are Indian and Pakistani Americans and our language and food are the same, so we got a good rapport and we were ready to work together. This was because our values ​​were the same." Were."

India was partitioned in 1947 and Pakistan came into existence. Now both these countries are nuclear weapons.

Both countries have fought many battles. Both countries make their own claims on the entire region of Jammu and Kashmir and often do politics of accusation and counter-accusation on each other.

This enmity between the two countries has affected many generations.

But many Indian and Pakistani Americans who have grown up learning different interpretations of history believe that the issues on which they differ do not create any kind of distress in their personal relationships and any candidate of their choice Together to support.

Dilawar and Shekhar do not talk about the controversial Kashmir issue or any other contentious issue of the sub-continent.

Shekhar says, "Absolutely not. We try to ignore it. We tell each other that this election is about domestic issues."

India accuses Pakistan of spreading unrest in Indian-administered Kashmir, while Pakistan accuses India of violating human rights in their region.

A section of the mainstream media and social media serve to add fuel to the fire.

As a result, for many first-generation Indians and Pakistani Americans, their vote has become an issue of their personal choice. According to whether there is a 'good' candidate for their current country, they make their decision.

Indian-Pakistani-Americans are not homogeneous communities. His reactions are due to his personal experiences.

Dilawar explains, "I think many first-generation Pakistani Americans have adopted more of their identity of an American Muslim after the 9/11 incident because it is like expressing pride in their faith as a response."

"In the era of Trump administration, in particular I expressed my faith more. I want people to know that an American Muslim looks like this."

But for many Indian and Pakistani Americans born and raised in America, the dispute between India and Pakistan does not matter. 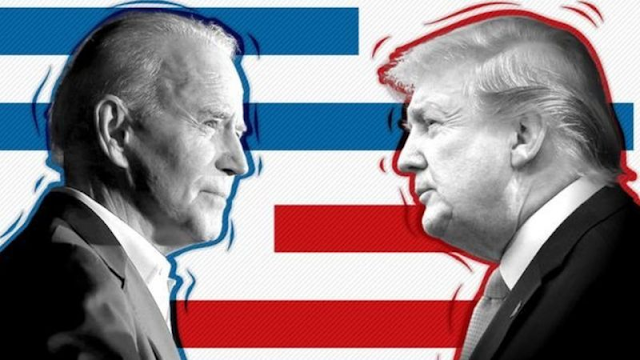 In both communities, a large population is inclined towards the Democrats, but the Republicans are trying to make inroads in this community.

Their homes are 20 minutes away from each other in Maryland.

Both are supporters of the Republican Party and do online campaigning for Trump.

During my zoom call, both of them make fun with each other.

Raj's parents had moved from Pakistan to India at the time of the India-Pakistan partition.

Raj says, "We are affected by Indo-Pakistan issues because we are who we are. But in reality it does not affect us, because local politics has an impact on everyone."

A recent study stated that "Indians do not consider the relationship between Americans and the United States to be a deciding issue for their choice during elections".

Economy and healthcare are the two most important issues facing this community.

Shahab says, "Our concern is how can we save our taxes. How can we get government contracts. I am not going to go to Srinagar to earn money."

Indian and Pakistani Americans, especially during the epidemic, have gone ahead and participated in social work.

For example, they speak the same language. Their food and drink are similar and their craze for cricket and Bollywood is also similar.

Manu Mathew, an Indian American living in Dallas, says that "some of the very best people I've met in America come from Pakistan."

Kamran Ali is the chairman of the National Board of the Pakistan-American Political Action Committee.

Regarding the India-Pakistan tension, Manu says, "We refrain from talking on this issue because we know we are not going to agree on it."

"If I sit with Kamran and talk on this issue for a long time, I know that both of us will not agree on this nor is there any difference on what is happening on the ground."

Even if this is not the expected answer, it is expected to reduce the conflict.

Pakistan-born Saba Shabnam, along with her Indian-American friend Mohammed Osman, is campaigning for Candace Vallezuela.

She says, "Kashmir is an issue and our heart is hurt by this matter. But I hope that it gets resolved."