Recent public opinion polls show Democratic Party candidate Joe Biden holds a significant and regular lead over Republican Donald Trump in the presidential race this year. They are getting gains not only at the national level but also in the hard-hitting states. 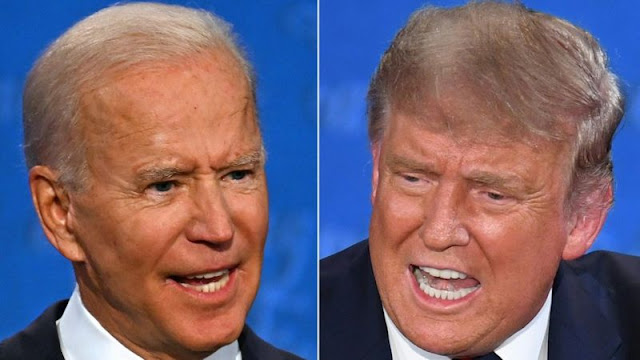 The Democratic Party also has a huge financial advantage because of collecting record-breaking electoral funds. It also means that they will dominate the media with their election messages in the last phase.

Although similar predictions were made about Hillary Clinton's victory in the last presidential election, but the results that were revealed are in front of everyone.

In such a situation, will Donald Trump once again prove the poll poll wrong? Can history repeat itself with his victory?

There are five reasons that indicate that Donald Trump may take the oath of office again.

In 2016, 11 days before the presidential election, then FBI chief James Comey spoke of starting a re-investigation against Hillary Clinton. The case was Hillary Clinton's use of a private email server as foreign minister.

After this, the matter remained in the headlines for almost a week, which brought life to life in Donald Trump's election campaign.

Even in the year 2020, almost two weeks before the elections, any political event of the same level can lead Donald Trump to victory. But, so far this month has brought bad news for Donald Trump. Such as their tax returns appearing and their hospitalization due to Kovid-19.

The New York Post mentioned in an article a mysterious laptop and an email that might link Biden to his son Hunter's attempts to lobby for a gas company in Ukraine.

The Conservatives tried to make it a big issue, but it is likely to have little impact on voters due to the allegation being suspicious and lack of clarity.

Donald Trump promised that much more would be revealed.

If this is just a beginning, then it can be a big thing to accuse Biden of being a vice president and bring him strong evidence.

Surveys may be wrong

Election surveys are showing him ahead of Trump after Joe Biden was elected presidential candidate from the Democratic Party.

Even in hard-hitting states, Biden has shown a steady lead.

But, looking at the 2016 elections, the national level gains had gone meaningless and the state level surveys were also proved wrong.

It is a challenge to guess who the voters will be in the presidential election. Last time some election surveys failed to make the same estimate.

Donald Trump was overwhelmingly voted by white Americans with no college degrees, which was not anticipated.

However, this time the New York Times has speculated that Biden's current margin would save him from a situation like 2016. However, there are some new obstacles in front of surveyors in 2020.

For example, for the first time many Americans are thinking about voting through the mail. However, the leaders of the Republican Party are already questioning the voting by mail.

They have feared fraud in it. However, Democrats have called it an attempt to suppress voters.

If the voters fill their forms incorrectly or do not follow the process completely or there is a delay or interruption in delivery of the mail, then valid votes can also be dismissed.

At the same time, voting can be difficult due to the low polling booths and low staff. In such a situation, it is possible that many people, who are being considered as potential voters in the election survey, do not show interest in voting.

Situations for Donald Trump have been negative after a debate between Donald Trump and Joe Biden about two weeks ago.

Election surveys show that the aggressive and intrusive way of Trump did not like the women living in suburban areas. The votes of women from these areas are considered important in the elections.

During this time, Biden has tried to dismiss the fears about his old age.

Donald Trump also lost an opportunity to change the image made after the first debate. He refused the second debate, because it was not happening face to face, but in a virtual way. Now another chance is coming to them on Thursday.

If Donald Trump looks calm this time, behaves in a manner similar to the president, and Biden makes a mistake, Trump's head may be heavy.

Even though the poll surveys are showing Biden ahead, there are many states in which Donald Trump can lead. In such a situation, the Electoral College can work in their favor.

The last time Donald Trump fell behind in popular votes, but he won in the Electoral College.

Actually, when Americans go to vote in presidential elections, they actually vote for a group of officials  Those who make electoral colleges.

These people are electors and their job is to choose the President and Vice-President. The number of electors from each state is roughly in proportion to the population of that state.

Donald Trump won in states such as Michigan and Wisconsin. This time these states are looking out of reach.

If Trump gets to the rest of the places, more white non-college voters vote in his favor in places like Pennsylvania and Florida, then Trump can win this time too.

There are also possibilities in which both Trump and Biden can get 269 electoral college votes.

In the event of getting equal votes, the delegation of the states in the House of Representatives will decide. It is believed that in this situation the majority can go in favor of Trump.

Biden is generally known for his impractical remarks, but this time he seems to be far from any such controversy.

But, now Biden's election campaign is going to get faster. In such a situation, the risk of misrepresentation also increases, which they may have to suffer in elections.

Those who like Biden include suburban liberals, disgruntled Republicans, Democrat working class and ethnic minorities.

All these are different from each other and there is also a conflict of interests. In such a situation, a mistake by Biden can make them angry.

At the same time, there is a possibility that the fatigue of the election campaign that dominates Biden may cause concerns about his age. If this happens, the path of victory could open for Donald Trump.