RR vs SRH: Hyderabad beat Rajasthan by eight wickets, Manish Pandey was the hero of victory

Manish Pandey scored an unbeaten 83 off 47 balls for Sunrisers Hyderabad. During this, four fours and eight sixes came out of his bat. At the same time, Shankar played an unbeaten 52-run knock in 51 balls with the help of six fours. 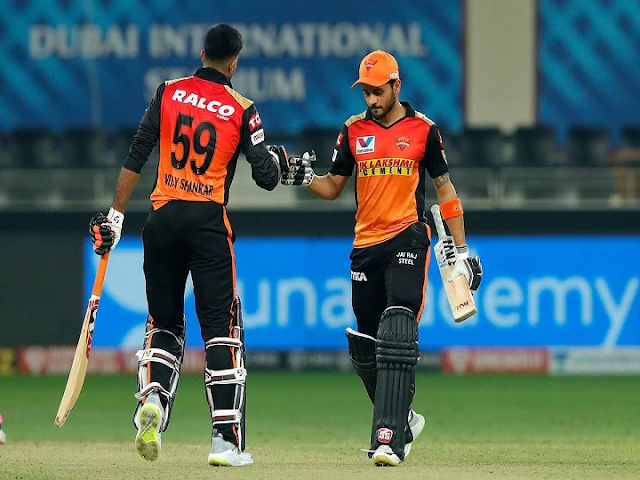 RR vs SRH: Sunrisers Hyderabad defeated Rajasthan Royals by eight wickets in the 40th match of IPL 2020. Manish Pandey and Vijay Shankar were the heroes of this victory of Hyderabad. Pandey scored 83 not out from 47 balls and Shankar scored 52 not out from 51 balls. These two also made an unbeaten partnership of 140 runs for the third wicket.

In fact, Rajasthan Royals had scored 154 runs for the loss of six wickets in 20 overs after the first play in this match. In response, Sunrisers Hyderabad easily chased down the target 11 balls earlier, despite falling two wickets for just 16 runs.

Earlier, after losing the toss, the Rajasthan Royals started to bat first. Scoring 30 runs in 3.3 overs, Robin Uthappa, who was seen in the best touch, was run out after scoring 19 runs in 13 balls. After this, Sanju Samson and Ben Stokes shared a 56-run partnership for the second wicket. Stokes was bowled out on 32 balls off Rashid Khan. At the same time, Samson became the victim of the holder after scoring 36 runs.

Jose Butler, who came to bat at number four, could score only 09 runs in 12 balls. At the same time, Captain Steve Smith scored 19 runs in 15 balls with the help of two fours. Finally, Ryan Parag tried to score fast for Rajasthan. But he also returned to the pavilion after scoring 20 runs in 12 balls. During this, he hit two fours and a six.

After this, Joffra Archer scored an unbeaten 16 off seven balls and brought the team score to 150. At the same time, Rahul Tewatia remained unbeaten after scoring two runs in three balls.

At the same time, Jason Holder, playing his first match of this season for Sunrisers Hyderabad, bowled amazingly. He took three wickets for 33 runs in his four overs. Apart from this, Rashid Khan took one wicket for 20 runs in four overs and Vijay Shankar took one wicket for 15 runs in three overs.

After this, Sunrisers Hyderabad started off badly to chase the target of 155 runs from Rajasthan. Captain David Warner, who was in excellent form in the very first over, was dismissed by four runs. After this, Informant batsman Johnny Bairstow returned to the pavilion after scoring 10 runs in seven balls on the score of 16 runs. Both of these were made victims by Jofra Archer.

Despite falling two wickets for 16 runs, Manish Pandey attacked the bowlers of Rajasthan. On the other hand, Vijay Shankar managed to bat. Pandey scored an unbeaten 83 from 47 balls. During this, four fours and eight sixes came out of his bat. At the same time, Shankar played an unbeaten 52-run knock in 51 balls with the help of six fours. Earlier, during bowling, Shankar also took a wicket.