Suryakumar Yadav played a brilliant innings of 79 not out in 43 balls for Mumbai Indians. During this, he hit 10 fours and three sixes. 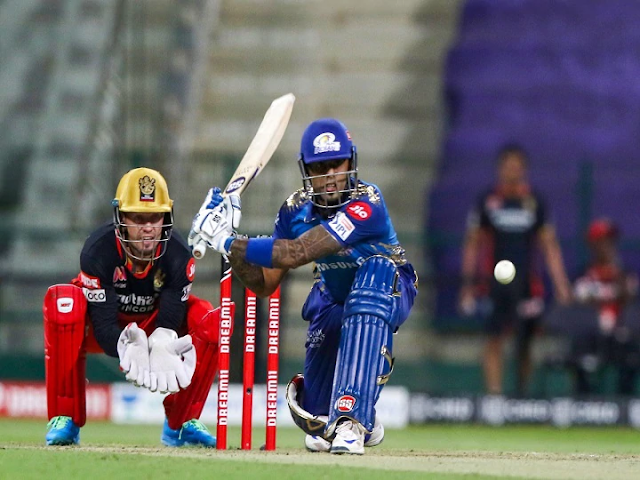 MI vs RCB: In the 48th match of IPL 2020, Mumbai Indians defeated Royal Challengers Bangalore by five wickets. With this victory, Mumbai now has 16 points and it is almost certain to qualify in the play-offs. Suryakumar Yadav was the hero of this Mumbai victory. Suryakumar played a brilliant innings of 79 not out from 43 balls. During this, he hit 10 fours and three sixes.

Earlier, Royal Challengers Bangalore started off to bat first after losing the toss. Josh Philip and Devadatta Padikal added 71 runs in 7.5 overs for the first wicket. Phillip was dismissed for 33 runs in 24 balls. During this, he hit four fours and a six.

After this, captain Virat Kohli was dismissed by scoring just 09 runs in 14 balls. Bumrah made him his victim. At the same time, AB de Villiers, who came to bat at number four, also returned to the pavilion after scoring 15 runs in 12 balls in order to score fast runs. He hit a four and a six.

As soon as De Villiers was dismissed, the pedicals also returned to the pavilion. He scored the highest 74 runs in 45 balls. During this time, 12 fours and a six came out of his bat. This is his fourth half-century in this season.

After this Shivam Dubey 02 and Chris Morris 04 were also out early. However, in the end, Washington Sundar scored 10 not out from 6 balls and Gurkeerat Singh Mann scored 14 not out from 11 balls, bringing the team score to 160.

At the same time, for Mumbai, Jasprit Bumrah performed amazingly. He took three wickets for 14 runs with a maiden in four overs of his quota. Apart from this, Trent Bolt, Rahul Chahar and Kieran Pollard got one success each.

After this, Mumbai Indians got off to a brilliant start to chase the target of 165 runs from Bangalore. Ishan Kishan and Quinton Dickock added 37 runs for the first wicket. Dickock was caught by Mohammad Siraj for 18 runs. After this, Kishan also returned to the pavilion after scoring 25 runs in 19 balls. Kishan hit three fours and a six in his short innings.

After this, Saurabh Tiwari, who came to bat at number four, was also out in the middle. He scored five runs in 8 balls. Despite falling wickets at regular intervals from one end, Suryakumar Yadav continued his aggressive style. Meanwhile, Krunal Pandya, who came to bat at number five, also returned to the pavilion after scoring 10 runs in 10 balls.

Hardik Pandya and Suryakumar shared a 51-run partnership after four wickets fell for 107 runs. However, Pandya had only 17 runs in it. In his small innings, Pandya hit two sixes.

At the same time, Suryakumar Yadav played a match-winning innings of 79 not out from 43 balls. During this, he hit 10 fours and three sixes. In the end, captain Kieran Pollard also remained unbeaten after making four in one ball.