Maldives: Why is the politics here divided between India and China?

The opposition coalition of Maldives, including the Progressive Party of Maldives (PPM) and the People's National Congress (PNC), has criticized the growing ties with India.

Allegations on India include that it wants to establish its military presence in the Maldives and is trying to interfere in the sovereignty and independence of the country. 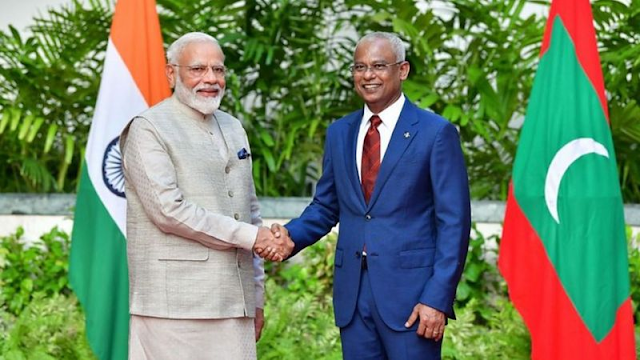 However the governments of both India and Maldives immediately denied these allegations.

The same opposition advocated Maldives relations with China when former President Abdulla Yameen was in power in the years 2013 and 2015. He consistently followed these relations and also sought the support of China on many issues, including efforts to bring out the jailed Yameen in the money laundering case.

What did India do?

In the last few months, India has made significant efforts to strengthen bilateral relations. These include significant steps such as granting $ 5.5 million for a community development project in July, a cargo ferry between Kozhudhupusi from Kochi to Maldives in India in September, and a Dornier aircraft at the behest of the Maldives.

To help mitigate the impact of Kovid-19, India gave budgetary support of $ 250 million to Maldives. Which was the largest amount of money that Maldives has received from any one country so far.

However, the most important thing is that India has promised to fund in August 2020 for the largest infrastructure project in Maldives so far. The project is a 6.7 km long bridge, known as the Greater Mail Connectivity Project (GMCP).

On October 12, India's Export Import Bank signed a $ 400 million credit line agreement with the Maldives for GMCP funds. Along with this, India has also given a grant of 100 million dollars.

According to the October 8 report of the Maldives news website Raajje.mv, "The historical relationship between Maldives and India had deteriorated a lot during Yameen's rule." However, after President Ibrahim Mohammed Solih took power in November 2018, the relationship has returned to track again.

What is the opposition's response?

Representatives of the opposition have criticized the help being given by Maldives to India and have also questioned the government on accepting this help. Also asked Indian military officials to leave Maldives.

Former Home Minister Omar Naseer alleged on September 1 that Indian soldiers were also present at a police training center in Maldives, which has been established with the help of India. According to a report by Mihru, a Dhivehi language daily newspaper, he also asked the government to clarify that it was not a camp for the Indian Army.

On September 22, PNC Vice President Mohammad Saeed said that the foreign policy of the ruling Bharatiya Janata Party (BJP) of India is to make the Maldives a 'slave'. According to the report of Waguthu, he also alleged that President Solih demanded that this policy be implemented. According to the news report, the opposition was at that time campaigning under the name "India Out" to demand the removal of Indian soldiers stationed in Maldives.

According to a recent Vagathu report, on October 18, former minister Naseer alleged that there are currently around 200 Indian soldiers stationed in the Maldives.

What are the charges?

The local media has given tremendous coverage to both the opposition's allegations and the government's response.

On 1 October, in a view printed on the Avas news website in Dhivehi language, criticizing the ruling Maldivian Democratic Party (MDP) was warned against India's presence in Maldives.

It was written in this article, "Many people believe that Maldives has become a permanent base of Indian soldiers for the last nine years."

It was further written, "Anything that will affect the independence and sovereignty of Maldives should not be denied ... Especially any other country should not be allowed to say anything about Maldives, to have an army in Maldives at all." .

On the criticism of the presence of foreign troops in Maldives, Major General Abdullah Shamal of the Defense Force said on September 6 that Indian soldiers were stationed in Maldives so that they could operate helicopters given by the Government of India.

According to the Miharu News report, he said that expert pilots from Maldives were not available and efforts were being made to train local pilots.

India's Ambassador to Maldives, Sanjay Sudhir, in an interview to Waguthu on 14 September dismissed the allegations that India wants to seize Maldives. He said that relations between India and Maldives have improved after President Solih came to power.

Till now the top faces of the government have praised and thanked the help from India.

In August, when India announced budgetary support and funding for the GMCP, President Solih wrote on Twitter, "It was a historic moment of cooperation between Maldives and India".

Defense Minister Maria Didi tweeted on September 1, "India has been a strong and strong partner and has given us great support even during this epidemic."

Parliament speaker and former President Mohammad Nasheed has been constantly criticizing the opposition and his support for China. The government "sold" Maldives to India, claiming this claim  Reacting, Nasheed said on September 1 that former President Yameen's agreements with China implicated the country in China's "debt trap".

On September 13, Waguthu News report quoted Nasheed as saying that the "India Out" campaign was prepared by religious extremist organizations and opposition parties PPM and PNC also joined it.

On 15 September, the Avas report quoted Foreign Minister Abdullah Shahid as saying that the relationship between Maldives and India was being criticized because the opposition did not accept the development work being implemented by the government in the country. Being able to

According to a report by Avas on 20 October, the leader of the MDP Parliamentary Group, Ali Azeem, said that an anti-India campaign was trying to bring "tense atmosphere" in the country, putting the leaders of opposition parties Allegations of corruption divert public attention.

Is China helping the opposition?

The ruling MDP has accused China of supporting the opposition. On September 6, Ali Azeem said in a program on Rajje TV that China should stop efforts to create turmoil in the political environment of Maldives by paying money to the opposition.

PNC Deputy Chief Adam Sharif Omar reportedly responded to this by stating that the opposition coalition is not a "puppet" of any other country.

According to a report published in Avas on 5 September, however, the opposition has made efforts to maintain its relations with China. The PPM and PNC have also held talks in Beijing with the Chinese government for allegedly acquitting former President Yameen of five years in prison.