IPL 2020 KKR vs RCB: Kolkata and Bangalore's playing eleven may be such, learn pitch report and match prediction

Kolkata's explosive all-rounder Sunil Narine has got permission to bowl in the IPL. But it is difficult to play in this match. 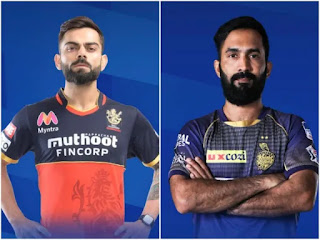 KKR vs RCB: The 39th match of IPL 2020 will be played between Kolkata Knight Riders and Royal Challengers Bangalore from 07:30 pm today at Sheikh Zayed Cricket Stadium in Abu Dhabi. In this season, when these two teams had come face to face earlier, Bangalore had won. In such a situKolkata will definitely want to avenge the previous defeat in this match.

KKR's explosive all-rounder Sunil Narine has received permission from the IPL committee to bowl in the league. But he is finding it difficult to play today. At the same time, Andre Russell's hamstring injury is also a concern for the team. If Russell is fit, then he is sure to play. But if unfit, he could be replaced by Tom Banton.

The weather will be perfectly clear in this match played at the Sheikh Zayed International Cricket Stadium in Abu Dhabi. However, the players will also have to face severe heat here. Dew can play a big role here. In such a situation, the team that wins the toss can decide to bat first.

Sheikh Zayed International Cricket Stadium in Abu Dhabi is completely different compared to Sharjah Cricket Stadium. This is a very big ground in terms of size. But here the spinners can get some help. In such a situation, both the teams can take the field with two lead spinners.

Our match prediction meter says that Kolkata Knight Riders will win in this match. However, the match is likely to remain closed.