IPL 2020: CSK set an unsolicited record with an embarrassing defeat against Mumbai

This is the biggest defeat of Chennai Super Kings by wickets in the history of 13 years of IPL, along with Dhoni's army has created another record that he never wanted to achieve. 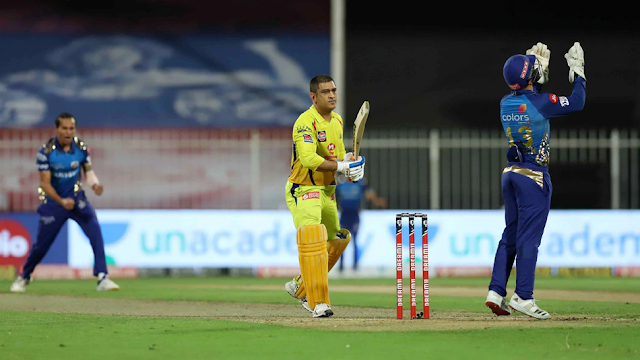 Dhoni expressed disappointment about this defeat

Mumbai Indians (MI) defeated 3-time champions Chennai Super Kings (CSK) by 10 wickets in the 41st match of IPL 2020 (IPL 2020) on Friday. This is Chennai's first 10 wicket loss in IPL history. Earlier, she had never lost by 10 wickets. That is, Chennai has broken its record, which she never wanted to maintain.

Mumbai had stopped Chennai for 114 runs after losing 9 wickets in 20 overs. Ishaan Kishan and Quinton de Kock, who chased down the target for Mumbai, scored an unbeaten 68 and an unbeaten 46, respectively, on which the 'Blue Army' managed to win without losing wickets in 12.2 overs. Earlier, Chennai had lost by 9 wickets, which was one of their worst losses. Incidentally, Chennai also got that defeat against Mumbai in 2008.