Sometimes in cricket it happens that even the stormy innings of a batsman does not tie the victory on his team's head. The same happened in the 50th match of the IPL tournament played in Abu Dhabi. 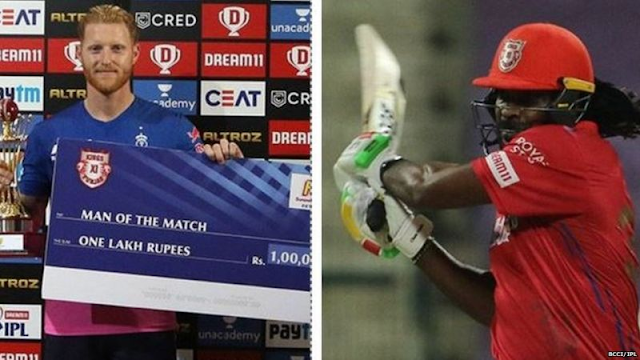 After Mandeep Singh's dismissal in the very first over, when Chris Gayle came to bat, he assured skipper KL Rahul and kept the Rajasthan Royals bowlers up to the last over.

Chris Gayle brought the score of Kings XI Punjab to 184 before being dismissed on the fourth ball of the 20th over. Showing the strength of his bat, Chris Gayle scored 99 runs hitting eight sixes and six fours.

He was very sorry that he missed a century by one run, but Santosh was also aware that Rajasthan managed to give a big challenge to the Royals.

But on this challenge, only the bowlers of Kings XI Punjab lost their water, who failed to screw up the Rajasthan Royals batsmen.

Four overs, 32 runs and two wickets - this was Ben Stokes' bowling. Then when it came to batting, Ben Stokes scored 50 runs in 26 balls with the help of three sixes and six fours.

When the first wicket of Rajasthan Royals fell to a score of 60 runs, 50 runs were from Ben Stokes.

This all-rounder performance by Ben Stokes gave Rajasthan Royals the victory and 'Man of the Match' title.

Ben Stokes sent batsmen like Kings XI Punjab captain KL Rahul and Nicholas Pooran, who could have given a huge challenge to Rajasthan Royals by 185 runs in partnership with Chris Gayle.

With his bat, Chris Gayle could be entitled to the 'man of the match' in this match, but his hopes were dashed with Ben Stokes' all-rounder performance and the defeat of Kings XI Punjab.

Ben Stokes, who was out first, returned to the pavilion after scoring 50 runs, followed by Robin Uthappa with 30 and then Sanju Samson contributed 48 runs and put Chris Gayle's hard work on.

At the same time, Mandeep Singh of Kings XI Punjab could not open his account, while Glenn Maxwell contributed six and Deepak Hooda one run.

Captain KL Rahul scored 46 and Nicholas Pooran scored 22 runs, but the 'Royal' batsman of Rajasthan proved to be as powerful as a fist made with five fingers.

However, despite the defeat in this match, Kings XI Punjab has come fourth in the points table. At the same time, Rajasthan Royals are in fifth place after winning the match.

Both teams have 12–12 points. Despite equal points, Kings XI Punjab are one notch above the Rajasthan Royals in the points table thanks to better net-runs.