In the IPL-13, two-time champions Kolkata Knight Riders and Royal Challengers Bangalore were face to face in Abu Dhabi on Wednesday. 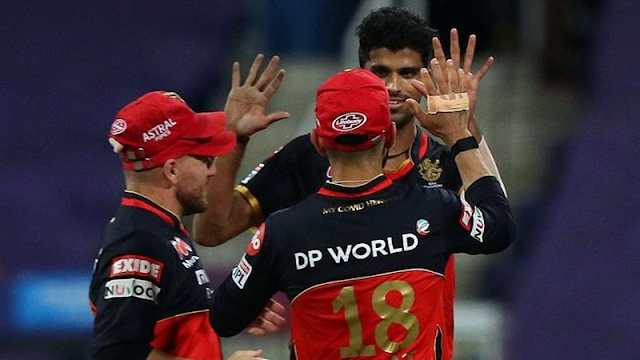 Kolkata captain Eoin Morgan won the toss in this match but Bangalore celebrated it. The bowlers, bowling the bowlers, first prevented Kolkata for only 84 runs for eight wickets in the allotted 20 overs, and after that the batsmen achieved the target of 85 runs for the win by losing only two wickets without much fanfare.

Bangalore openers Devdat Padikkal and Aaron Finch added 46 runs in just 6.2 overs for the first wicket to show that there was nothing in the wicket which was felt by Kolkata batsmen.

Devdat Padikkal was run out after scoring 25 runs with the help of three fours off only 17 balls, while Aaron Finch scored 16 runs. In a tournament like the IPL, where two matches were held on the same day, in the same day, with the same breath stopping and ending in a super over, Bangalore would not have expected such an easy win.

A score of only 85 runs to win was like cumin in the camel's mouth for his batsmen. Finally, Bangalore won the eight-wicket victory in 13.3 overs with the help of captain Virat Kohli's unbeaten 18 and Gurkeerat Singh's unbeaten 21 runs.

With this win, Bangalore has reached second place in the points table with seven wins in 10 matches, three defeats and 14 points.

He had to bat first after winning the toss

When Kolkata captain Eoin Morgan decided to bat first after winning the toss, hardly anyone would have thought that this team will be able to score only 84 runs after losing the entire 20 overs, losing eight wickets, but only after the second over. Was starting

Bangalore captain Virat Kohli replaced Mohammad Siraj in the team in place of Shahbaz Ahmed. In his first and second over of the innings, he gave two tough shocks to Kolkata, due to which Kolkata did not recover in the entire match.

First, Mohammad Siraj caught opener Rahul Tripathi in the hands of wicketkeeper AB de Villiers. Rahul could only score one run. After that Mohammad Siraj bowled Nitish Rana on the next ball. He took his first over maiden wicket.

Even after this, the Kolkata batsmen did not stop coming and going on the pitch. In the third over, second opener Shubman Gill got a simple catch to Chris Maurice standing at mid-on off the bowler of the new bowler Navdeep Saini. He could only score one run. The fourth wicket also fell just on sight. Tom Benton was caught by Mohammed Siraj and caught by wicket keeper AB de Villiers. He scored ten runs.

Kolkata got its fourth blow for only 14 runs. By now, the bowlers of Bangalore had written the script, just waiting for how much Kolkata could score in this condition, but it could not even make a respectable score. The fifth wicket fell as Dinesh Karthik. He was LBW off Yuzvendra Chahal by scoring only four runs.

When a team can score only 84 runs, then captain Eoin Morgan's 30 runs will be called consolation. The Kolkata batsmen did not learn any lesson from the continuously falling wicket.

After Dinesh Karthik, Pat Cummins also became the victim of Chahal by scoring four runs, then Eoin Morgan made Washington Sundar his victim. And when the Kolkata batsman could not do anything special, what would the tail batsmen do. It was Lockie Fagerson who scored 19 not out and Kuldeep Yadav scored 12 to take the score to 84 for eight.