Till now we believe that CNG is the cleanest fuel to run a vehicle. But now more clean fuel has also been created than CNG, it is called 'Hydrogen CNG or HCNG. 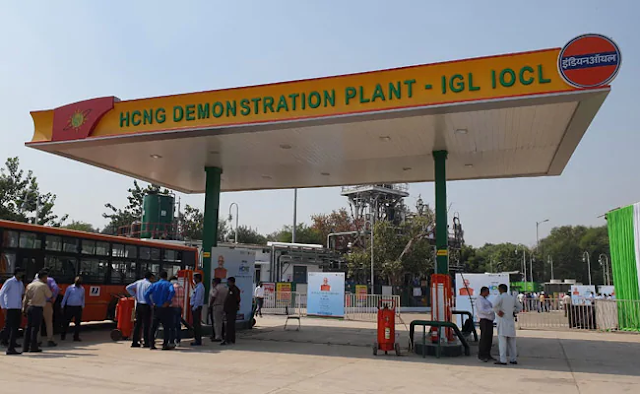 Till now we believe that CNG is the cleanest fuel to run a vehicle. But now even more clean fuel has been created than CNG, it is called 'Hydrogen CNG or HCNG. The country's first hydrogen CNG plant at Delhi's Rajghat bus depot has started from Tuesday. It was inaugurated by Delhi Transport Minister Kailash Gehlot and Union Petroleum and Natural Gas Minister Dharmendra Pradhan. With the joint efforts of Delhi Government, Central Government, Indian Oil Corporation and Indraprastha Gas Limited, it started as a plant and distribution center.

What is Hydrogen CNG

Hydrogen CNG or H-CNG fuel will contain a mixture of 18 percent hydrogen and 82 percent CNG gas. In this plant, 18% hydrogen is reformed by steaming CNG itself. The process of burning is completed by having hydrogen. Fuel without burn is reduced.

According to Delhi Transport Minister Kailash Gehlot, "The study so far has found that using HCNG by adding 18% hydrogen to CNG will reduce 70-75% carbon monoxide and 25% hydrocarbons and three to four percent fuel efficiency." Will increase '. He told that at present, there will be no need for any major physical change to use hydrogen CNG in CNG buses, only technically the vehicle software will have to be changed.

Delhi Transport Minister Kailash Gehlot said that the plant is also ready and the distribution work has started from here, but how effective is hydrogen CNG, to see what kind of results would come from running hydrogen CNG in CNG buses. For the next 6 months from Tuesday, its trial will be done in 50 buses of DTC and cluster. After this, an independent organization named IAT will submit its report to the government, after which further strategies will be made.

What do you know?

Vivek Chattopadhyay said that carbon monoxide is a poisonous gas. This gas is odorless and hence becomes more dangerous. When this gas enters the body, it reacts with the hemoglobin in the blood to form carboxy hemoglobin. This hinders the supply of oxygen in the body. Exposure to this gas causes fatigue, insomnia, and if a person is constantly in contact with it in a closed pool, it can be fatal.