First Metro train run in Pakistan with the help of China 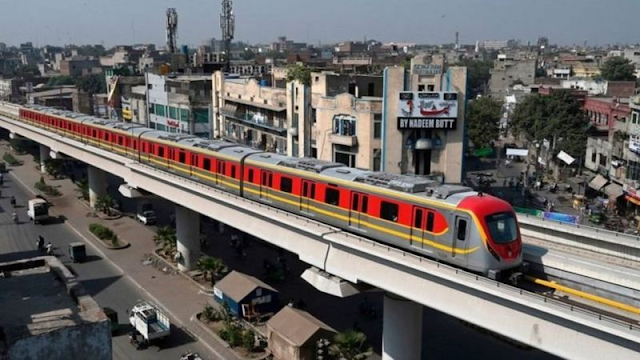 There are more than two dozen stations on this 27 kilometer (17-mile) long Orange Line. It will be easy to travel anywhere in the crowded Lahore city. If it takes two and a half hours to go anywhere by bus, then the metro can be reached in just 45 minutes.

Officials expect that about 2.5 lakh people will travel in it every day when the metro is fully operational.

Punjab State Chief Minister Osman Bujdar said at the inauguration ceremony on Sunday, "This project will provide world class facilities to the public in Lahore."

The cost of this project is 300 billion rupees. There was a delay of many years in the completion of this project and there were many political disputes. But finally on Monday, this service was started for the common people.

This metro line has been built with the help of China. In recent years, Pakistan has taken a big loan, questions about which are increasing.

China has invested billions of dollars in Pakistan under its Belt and Road initiative, which aims to link the economies of Asia, Africa and Europe with large infrastructure projects.

Voices were also raised against this metro project. In fact, many people were worried that due to this project, some of the most popular places in Lahore, including the World Heritage Site, Shalimar Gardens, will be damaged. Protests were also held against this project.

More than 600 trees falling in the path of this metro line were also cut down.

On the occasion of the inauguration, Chinese Consul General Long Dingbin described this metro system as a milestone in the friendship between Pakistan and China.

He said, "I congratulate the Government of Punjab and the people of Pakistan on this occasion."

China's official news agency Xinhua described the Orange Line as "the beginning of a new phase for the South Asian country in the public transport sector".