For Chennai Super Kings, Ruturaj Gaikwad scored 72 runs in 53 balls. During this, he hit six fours and two sixes. 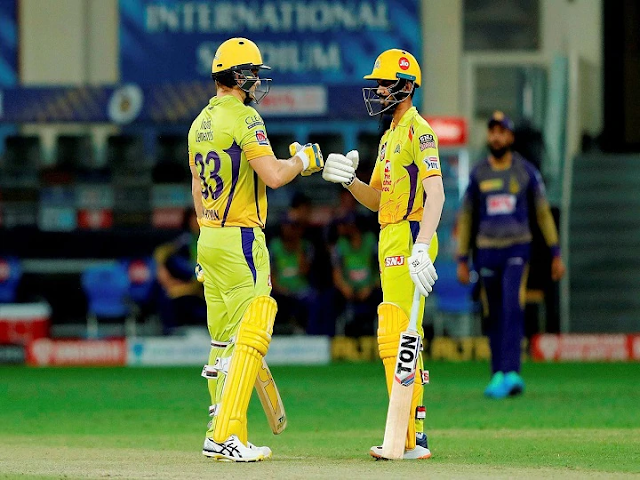 CSK vs KKR: In the 49th match of IPL 2020, Chennai Super Kings defeated Kolkata Knight Riders by six wickets. With this defeat, Kolkata's hopes of reaching the play-off are also over. At the same time, Mumbai Indians have qualified for the play-offs with the victory of Chennai.

Kolkata had scored 172 runs in 20 overs at the loss of five wickets after playing first. In response, Chennai chased down the target on the final ball thanks to Ruturaj Gaikwad's brilliant half-century and Ravindra Jadeja's stormy innings.

Earlier, Nitish Rana and Shubman Gill got off to a great start to Kolkata Knight Riders who came out to bat first after losing the toss. Both of them added 53 runs in 7.2 overs for the first wicket. Gill was dismissed for 26 from 17 balls with the help of four fours. At the same time, Sunil Narine, who came to bat at number three, could score only seven runs in seven balls. After him Rinku Singh also returned to the pavilion after scoring 11 runs.

However, Nitish Rana continued his aggressive approach from one end and fired shots all around the field. Rana scored 87 runs in 61 balls. During this time, 10 fours and four sixes came out of his bat. Captain Eoin Morgan could score only 15 runs in 12 balls. At the same time, Dinesh Karthik remained unbeaten after scoring 21 runs in 10 balls.

For Chennai Super Kings, fast bowler Lungi Nagidi took two wickets for 34 runs in the four overs of his quota. Apart from this, Mitchell Santner, Ravindra Jadeja and Karn Sharma got one success each.

After this, Chennai Super Kings got off to a great start by Ruturaj Gaikwad and Shane Watson after chasing a huge target of 173 runs from Kolkata Knight Riders. Both of them added 50 runs in 7.3 overs for the first wicket. Watson scored 14 off 19 balls and was caught by Varun Chakraborty.

However, Kolkata had strengthened their grip in the match due to the frequent dismissals of Rayudu and MS Dhoni, but in the end Ravindra Jadeja gave his team victory by playing a stormy innings of 31 runs in 11 balls. During this time, his strike rate was 281.82. In this innings, Jadeja hit two fours and three sixes. Sam Curran also returned unbeaten after scoring 13 runs.