The manifesto released in the presence of big leaders of the party, including the Leader of the Opposition and CM of the Grand Alliance, Tejashwi Yadav, has named this 'Pran Our Sankalp Parivartan Ke'. 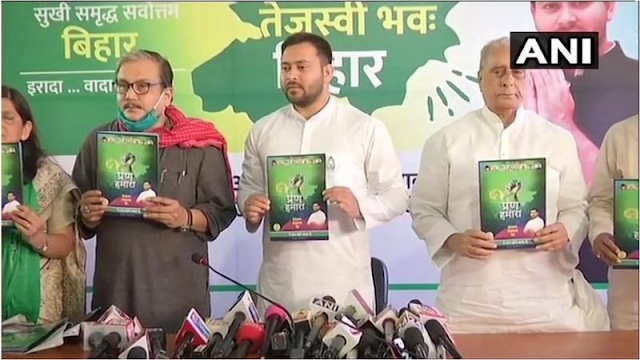 Many issues have been included in it, mainly employment, agriculture, industry and education.

The RJD has announced to give 10 lakh jobs on forming a government, as well as waiving the loan of farmers.

Many other promises included in this manifesto have also been made -

Promise to provide 10 lakh jobs to unemployed youth of Bihar. The process of restoration will begin with the first meeting of the cabinet.

Abolishing contractual practice, everyone will be given equal pay for equal work. Privatization in government departments will be discontinued.

Bihari youth will not have to pay the application fee to fill the government examination form and the journey to the examination center will be free.

The demands of Anganwadi servant helpers, Asha workers, rural doctors will be met.

The loan of the farmers will be forgiven.

New liberal industry policy will be brought. A professional commission will be set up. For the safety of traders and fear-free trade, a trade protection squad will be formed in industrial areas.

22 percent of the state's GDip will be spent on education. English and computer education along with mother tongue will be compulsory in all government and non-government schools.

Backward and Dalit students will be given laptops if they get more than 80 percent marks in intermediate. Separate toilet arrangements for students in all government schools, sanitary napkins will be given free of cost to school girls.

Local policy will be implemented in any government job in the state. At least 85 percent reservation will be ensured for local candidates.

Unemployment allowance of Rs 1500 will be given to unemployed youth. The pension of the poor and elderly will be increased from Rs 400 to Rs 1000 per month.

While issuing the manifesto, Tejashwi Yadav said, "I am promising 10 lakh jobs. I could also promise 10 million jobs. But, I am not doing this because our promise will be the truth in the first cabinet meeting. This will be the first time in the country that 10 lakh jobs will be generated in one go.

Taking a dig at the BJP's promise of 19 lakh jobs, he said, "Tell the BJP who is the face of their Chief Minister, Nitish Kumar?" Nitish Kumar had already raised his hands on 10 lakh jobs from where he would give. So from where BJP will give leadership, Nitish Kumar is leading, then who are they making fools. ''

Earlier, the Mahagathbandhan has issued its manifesto, BJP and JDU have issued their manifestos, in which promises related to jobs and agricultural law have been made.