The third 2 + 2 ministerial level meeting was held between India and the United States on Tuesday at Hyderabad House in New Delhi. During this time, several important agreements were signed between the two countries, including the Basic Exchange and Cooperation Agreement (BECA). 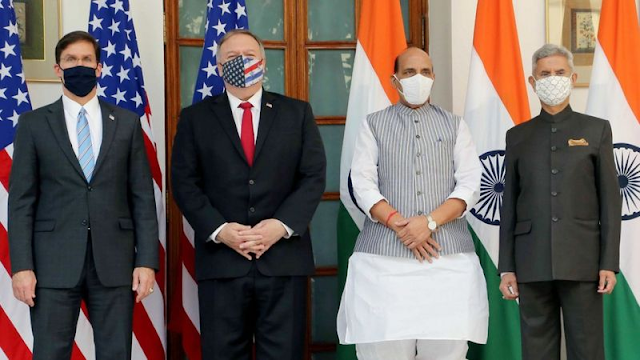 Under the Beca Agreement, the two countries will share each other with state-of-the-art military technology, equipment and geospatial maps. The Beka Agreement was signed by Additional Secretary Jiveesh Nandan on behalf of India.

In the meeting, from the Indian side, Foreign Minister S.K. Jaishankar and Defense Minister Rajnath Singh, while Foreign Minister Mike Pompeo and Defense Minister Mark Asper from the United States were involved in this meeting. Apart from this, the presence of top military and security officers was also present in the meeting. The two countries discussed business, security, strategic and strategic cooperation of the Indian and Pacific Ocean regions.

Now the response of India's neighboring country Pakistan has also come on this agreement, which is very sharp.

The Pakistani Foreign Ministry has issued a statement raising questions on India's missile and military tests.

"Recent frequent missile tests conducted by India are an expression of a dangerous Indian conventional and nuclear military buildup. This has again confirmed the concerns of many international experts regarding high-tech military trade with India, which has not only international Has abolished norms but negatively affected strategic stability in South Asia. These developments clearly defy the argument that this spread of India in international export control regimes will be curbed. "

After the meeting, US Defense Minister Mike Asper said, "Defense agreements between the two countries are based on our shared values ​​and interests. We stand shoulder to shoulder to ensure that there is an open and independent Indo-Pacific region for all. In view of China's increasing aggression and destabilizing activities. "

Mark Asper said that the two-day meeting also discussed strengthening regional cooperation in the field of defense, increasing defense trade and mutual cooperation between the armies.

Later, the US Secretary of State announced a new health treaty between India and the US, in which he targeted China.

A joint statement was issued after the meeting in which the two countries pledged to increase cooperation with each other.

US Secretary of State Mike Pompeo said, "The Communist Party of China is not friendly about democracy, legal rules, clarity between each other and freedom of navigation (freedom of navigation) which is a free and open Indo-Pacific region. Is the basis. "

Prior to this meeting, Mike Pompeo went to the National War Memorial, retweeting a tweet with a photo of which he wrote that "we will never forget the brave men, women who laid down their lives in defense of the world's greatest democracy."

Galvan was also mentioned in speeches by US ministers where 20 Indian soldiers were killed in a clash with the Chinese army, but both ministers of India - S.K. Jaishankar and Rajnath Singh appeared to be avoiding taking the name of China.

What did Rajnath Singh say?

Defense Minister Rajnath Singh called 'Beka' an important link and said that "We had a dialogue on important issues. Our military cooperation with the US is progressing very well. We have marked projects for joint development of defense equipment." Have done.

"We committed ourselves to peace and security in the Indo-Pacific region," he said.

During this time, External Affairs Minister S Jaishankar said, "During this meeting there was a discussion on the activities going on in our neighboring countries. We made it clear that terrorist activities from across the border are not acceptable at all."

The Foreign Minister also spoke of cross-border terrorism, respecting the sovereignty and borders of Afghanistan and every country.

After the joint statement, when a journalist was asked by Rajnath Singh whether you plan to buy more weapons from America, the Defense Minister said, "Any country buying or selling weapons from other countries, the agreement between the two countries It depends on the conversation. "

What is Basic Exchange and Cooperation Agreement?

The Basic Exchange and Cooperation Agreement, or 'Beka', is the last of the four basic agreements between India and the United States. This leads to logistics and military cooperation between the two countries will lead to.

The first agreement was made in 2002 to protect military information. Subsequently two agreements were signed in 2016 and 2018 which were related to logistics and secure communication.

The signing of this agreement means that India will get accurate geospatial / geospatial data from the US, which will be very effective in military action.

While this will increase defense cooperation between the two countries, an important part of this agreement is that information collected from American satellites can be shared with India. Its strategic advantage will be given to the Indian missile system.

With this, India will also be included in the category of countries whose missiles will be able to target accurately from a distance of up to thousand kilometers.

Apart from this, armed drones like Predator-B will also be available to India from USA. These armed drones are capable of destroying and locating enemy targets.