The 'Islamic Movement Bangladesh', a group advocating the enforcement of Islamic law, held a rally in Dhaka. The group has urged Muslims around the world to boycott French products. 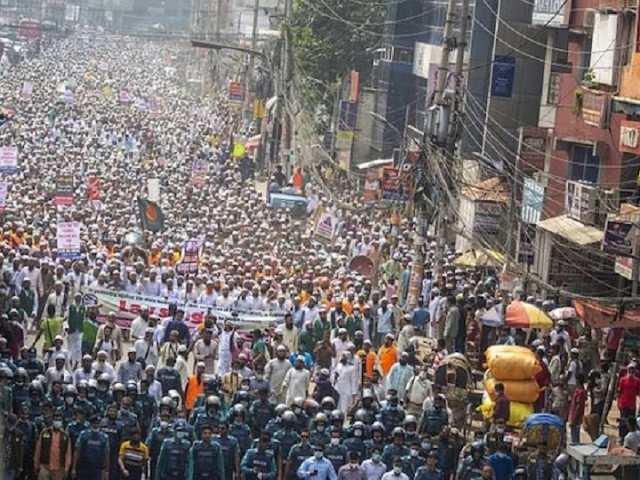 Thousands of people protested in Dhaka, Bangladesh's capital, on Tuesday in support of the demand for boycott of French goods. The protesters also brought a large cut-out of the photo of the French President Emmanuel Macron in whose shoes were hung around the neck. The effigy of the French President was also burnt. French President Macron is facing heavy opposition in Turkey, Pakistan and Bangladesh. Last week, Macron's remarks angered Muslim-majority countries, in which they refused to condemn the publication or display of Prophet Muhammad's cartoons.

Due to this the opposition of Macros

An 18-year-old man of Chechen origin is accused of beheading a French teacher near Paris on October 16, who showed cartoons of Prophet Muhammad. Following this incident, anti-French protests are taking place in Turkey and Arab countries, with President Emmanuel Mancro taking a strong stand against Islamic extremism and calling for a boycott of French things. Although the European allies have supported the Macros, but Muslim-majority countries have been angry with the prophet's cartoon. These countries consider it an insult to Islam.

France considers religious satire as one of the things underlying freedom of expression, while many Muslims consider any alleged satire on the Prophet to be a serious offense.

The 'Islamic Movement Bangladesh', a group advocating the enforcement of Islamic law, held a rally in Dhaka. This group has urged Muslims around the world to boycott French products. Rezaul Karim, the head of the Islamic movement Bangladesh, urged France to refrain from displaying any satirical images of Prophet Muhammad.

Pakistan summoned French Ambassador Mark Bareti to register a sharp protest against the publication of the cartoon on the Prophet and the statement of French President Emmanuel Macron. At the same time, the country's parliament demanded the government to withdraw its envoy from Paris. Foreign Minister Shah Mahmood Qureshi made a motion in the National Assembly condemning the publication of cartoons in France and "acts against Islam in some countries. The resolution was unanimously passed."