26th September 2020 Sijoul, Madhubani:  Akin to the English proverb, ‘It is better to wear out than to rust out’, the motivating Maithili adage is ‘Bais Nai Mari, Lari Mari’ which I often heard from my mother during my formative years in the riverine village Sijoul where a Ram temple besides Lord Mahadev exists. The Geeta, the epic originating from the Hindu scriptures preaches the same with its famous quotation—Karmanye Vadhikaraste Ma Phaleshu, meaning – an act of our duty is within ourselves, a result is not. Hence, let’s concentrate on our work rather than the fruits of our efforts.

Jaipura Jha is popularly and lovingly known as Maunsi (Maan Jaisee), a motherly figure to one and all in the village, irrespective of their caste, creed or religion. On 25th September 1938, she was born to Phul Devi and Sahdev Jha in the village of Raiyam falling in the Jhanjharpur constituency of the Mithila belt where Goddess Sita was incarnated in the Treta epoch well mentioned in yet another Hindu epic, the Ramayana.

In violation of the Child Marriage Restraint Act, 1929, she was made to enter the matrimonial state of life at the extremely tender age of seven the year when an atom bomb was dropped at Hiroshima in Japan. That is the age when a kid is expected to be frisking and gambolling about at the playground. On the sharp contrary, she had to take the charge of the kitchen, doing the dishes following the social dictates of those days. After that was the worst.

Being widowed in her thirties she had no option but to heroically inch up her veil and come out of the confines of the thatched dwelling. She worked on a farm, mowed the grass, raised and grazed a calf to eke out a living, setting aside the social mores that women were meant for household chores.

With her leonine courage, the strength of mind, self-respect and resolve, she set an example for other widows and womenfolk in the area to come forward and stand on their own feet as work is worship. Known as an epitome of guts and social service, she commanded high respects and reverence in society regardless of the social strata of the community people. Be it a social ritual or celebration of a varied nature, her benign presence was always marked with awe and wow.

She was a masterpiece of culinary science, more particularly Mithila cuisines where varieties of dishes are the spices of life. A selection of 56 dishes is found to be seen all over the northern Gangetic region where the rivers like Kamla, Balan and Koshi flow and they irrigate agrarian land and water flora and fauna in their vicinity.

Once I asked her how she cooked such delicious dishes without onions and garlic, and also without applying too much of spices in cookery. Citing an eye-opening point, she said, “what matters most while cooking or doing something else is precise time, adequate flame and appropriate seasoning. Moreover, your tendency to excel in whatever you do holds much water”. This has been a guiding force for me in my life since then.

With my father Dayanand Jha passing away in his early forties, her ordeal of life is inexplicable. She was all set to be a sati but for me, whereas I was hardly a year old tot. The cupboard was bare. Backup was from nowhere. Life was dark. The silver lining was too small to see. Nonetheless, over time, she set an example of how to live a life in the harsh conditions of monetary paucity and other resources required for the functioning of life.

Until I attained the age of 16 and left the house for Patna in search of a job and pursuit of possible higher education, she continued to spin a charkha to make balls of thread out of cotton for which she had an account with the Khadigramodyog at Rajnagar, nearest railway station under single gauge. She always commuted on foot around 10 kilometres to deposit the handmade ready products to the concerned authority.

She was able to earn redeemable points for around Rs 50 a month against which she used to buy the essentials of Khadi products available in those days. Cash was a rare provision to buy something of one’s choice in the open market. Hats off to Mahatma Gandhi, father of the nation for his initiative of Khadigramodyog that gave a fresh lease of life to many around!

Thanks to KGU she was able to get clothes, bedsheets and something like those for herself and me as well. One of the clothes, I still treasure in my memory is the thick Khadi lungi I was provided with which I carried on to Patna in 1988 on leaving my village. I used to use it both as attire and a bed-sheet.

On her awareness of medical science, she always gave me a leaf of basil (Tulsi) to eat and a few of them to keep in my pocket whenever I ventured out of my shanty. However, I came to realize the importance and medicinal value of basil leaves much later, more particularly during the pandemic coronavirus wherein Tulsi Kadha turned out to be a panacea. On a health note, a friend of mine, Vishwanath Jha confirmed me of such curative effects on his recovery from the Covid-19 a few months back this year.

The agricultural land was too little to run a small family. However, partly with seasonal cultivation of food grains and vegetables, and partly with other work, she managed to make both ends meet. Moreover, being meticulous and sagacious she would dry a portion of vegetables like cauliflower or chenopodium album (bathua) for the days of scarcity or rainy days. What is more, squirrelling food grains and eatables at a time for a year or so was her outstanding house management for which she had manually made large containers of clay known as Kothi in local parlance. At times she would preserve paddy, rice and wheat for close ones selflessly and altruistically. Such was social and family bonding.

Suryanamaskar- offering water to the sun god and Tulsi was one of her daily rituals and cultural ethos she had set for herself throughout life. When it came to accompanying the musical band of village women in folklore at various occasions and rites, she volunteered to do so. On the other hand, she was very conscientious and meticulous regarding her hygiene. Until she was subjected to bed, she would always keep her house and surroundings neat and clean.

On her education, she had to give a thumb impression as she never went to any formal schools and held a pen or notebook in her hands but passed the school of hard knocks in her life with the possibly highest degree of marks. She valued education to the extent that I earned a degree of Doctorate from prestigious Patna University. It was her daily routine to shake me awake around 4 O’clock even in bone-chilling winter so that I was able to study my coursebook during my school days. Her biological clock was well-tuned and synchronized enough not to miss even a day. While I sat studying books she did her household work in the wee hours.

Her medical skills vis-à-vis Ayurveda were excellent. Hardly ever was I administered any allopathic medication as long as I was in the village for 16 years on the trot. Instead, she would always give me certain herbs to keep any ailments at bay; following the adage- prevention is better than cure. She always maintained good health and remained fit and fine until she was overpowered by the carcinoma. 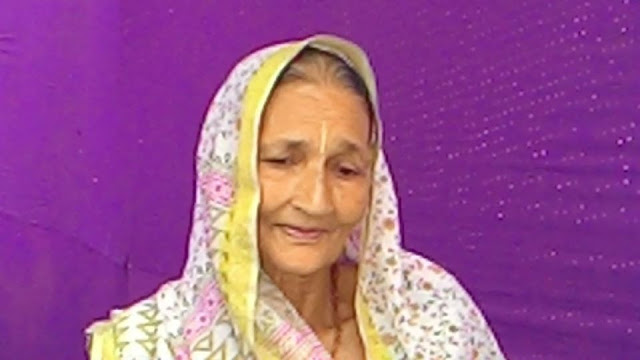 While travelling by Indigo flight from Delhi to Patna for the first time in 2009 she seemed to be a perfectly well-travelled person. She has been as adaptable to the situation as she is meant for it. She’s lived a life of ups and downs but remained rooted in the Indian values and ethics. On her last legs, she chose to return and stay in the village. For the only thing, she’s always prayed to God is our well-being. She had an appearance in the Maithili movie ‘Sajna Ke Angna Me Solah Singar’ directed by Murlidhar and released in 2012.

Her hardship began to peter out with my venturing out to the town and further establishing a social enterprise-British Lingua in 1993 in Patna. The time was up for more of her happiness but then the irony of fate was something different story to tell. She is on the deathbed battling for her life wishing all of us to be alive and kicking.

Her praises are sung not only by three children Madan Jha, Meena Jha and me, the youngest Birbal Jha and grandchildren Vandana, Mala, Anshu, Khushboo, Mimansa and Shabdagya, and daughters-in-law Pawan Jha and Gauri Rani but by villages of admirers who affectionately called her Maunsi.