JP Nadda Reaches out to Maithil Voters in Delhi


New Delhi, 4.02.2030: With an eye on the  sizable number of voters (around 40 lacs) in Delhi, the BJP President JP Nadda reached out to Maithili-speaking migrants in the national capital, soliciting their votes on 8th February, the day of Delhi Assembly Polls.

He was speaking at  a function organised at the residence of Rajya Sabha member Prabhat Jha on Copernicus Marg in the capital. 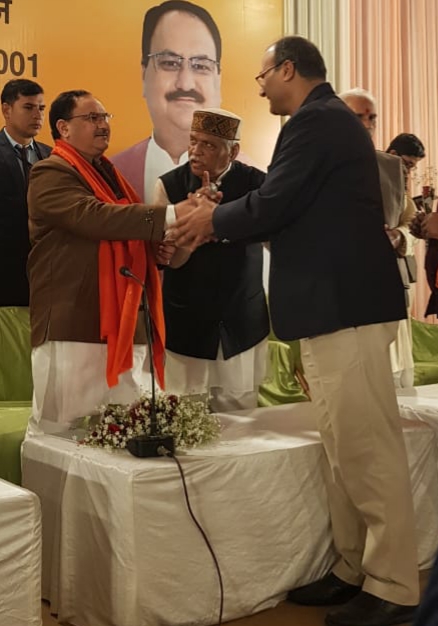 "I will safeguard the interest and value of the  Mithila Paag which has been conferred on me as a token of honour", He said addressing  the gathering. It was his maiden interaction with the mammoth gathering after he was made the president of the party.

Nadda, making a scathing attack on CM Arvind Kejriwal’s government enlightened the audience how unsafe drinking  water supplied to the people of the NCT  as per reports placed by Bureau of Indian standard.

"Kejriwal is playing the politics of an eye-wash  with the false commitments and wrong data and also  plundering the governments exchequre on advertisements for which people should teach  him a lesson by their votes",  added Nadda.

BJP National vice president  Prabhat Jha called upon Maithil migrants to stand united and vote to get fair share in the government formation in Delhi by voting BJP to power.

Dr Birbal Jha, noted author and chairman of  Mithilalok Foundation welcomed, JP Nadda  with a bouquet of flowers in the felicitation ceremony held here.
- Ashish Jha
By Ashish
Email ThisBlogThis!Share to TwitterShare to FacebookShare to Pinterest