Where is a moral ground?  The pat counter-question was in response to the resignation sought by the political opponent from RJD supremo Lalu Yadav, who was then the chief minister of the Government of Bihar.

However, he is currently incarcerated in the jail for his conviction in a fodder scam case under different IPC sections. Thereby, he is barred from fighting any elections and enjoying the taste of power either. 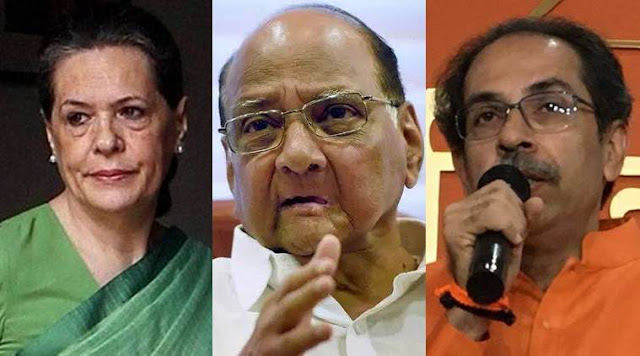 Intoxicated in absolute power at the relevant time, veteran Lalu Yadav might have taken only a literal meaning of the word ground, which is the solid surface of the earth, ignoring its wide figurative meanings. Hence, he chose not to budge then. But the legal ground did not spare him, sticking its wise saying - be you never so high, the law is above you.

But the unanswered question of ‘moral ground’ is still fresh in Indian politics whether this ground exists or it has sunk so low that it has become invisible now. A case of Maharashtra politics is the latest pointer.

The melodrama spanning around a month after the declaration of 2019 Maharashtra Assembly election results came to close on Saturday. No instant elected government was formed in want of absolute majority. None of the political party enjoyed the magic number of 145 in 288 seats of the Assembly.

However, pre-poll political alliance of BJP -Shiv Sena was voted to form the government with 105 seats to the saffron party and 56 to its ally. Notwithstanding this fact, Sena backtracked and began to bargain for the chief ministerial post, leaving its big brother in the lurch for number-game. Nothing could materialize and the age old political marriage was divorced with all acrimony for the rejoice of opponents. 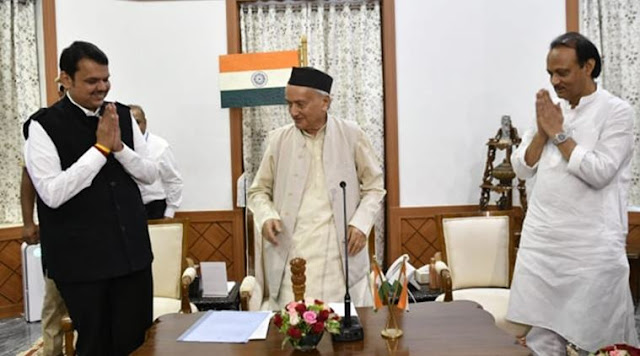 The political ideology was assigned to ashes merely for power-hunger. Thus, the veneer of ideological similarities came in full view of the public. Everything hidden so far was unmasked to the bone. Naked dance of politics for power ensued with days passing by.

Moreover, the drama heightened for a scene-drop. The new scene that emerged was that early in the day on 23rd November 2019, Devendra Fadnavis born in 1970 was sworn in as Chief Minister in succession. He has been able to cobble up the number from the breakaway group of NCP led by Ajit Pawar who is facing corruption charges. God knows what will happen now.

Shiv Sena that always claimed to be opposed to the ideology of Congress and NCP, a splinter of larger Congress got exposed in the aftermath of election results. It was seen inching as close as possible to both of the political opponents since its inception.


Breaking all moral grounds for power, it shook hands with Congress and NCP and even declared that Udhav Thackrey was going to be Chief-Minister of Maharashtra which was flashed in all media only to see something else. However, the political acumen of BJP deflated the wheels of Sena, with a masterstroke of winning over the heart of Ajit Pawar led NCP.

But the bigger question of electorate lies unanswered as whom to believe and whom not to believe when it comes to the moral ground. Who has the ideology and who hasn’t?  It is a question difficult to be answered in today’s political scenario.  Morality has taken a back seat whereas hunger for power is in the driver’s seat. The saying fits well here- all is fair in love and war. In other words -all is fair in politics.

The social entrepreneur Dr Birbal Jha is a noted author and the Managing Director of Lingua Multiservices Pvt Ltd having a popular trademark ‘British Lingua’. He is regarded as having created a revolution in English training in India with the slogan ‘English for all’
By Ashish
Email ThisBlogThis!Share to TwitterShare to FacebookShare to Pinterest