World Has Come Closer than Ever Before: Modi

Prime Minister Narendra Modi on Friday in Russia's Petersburg, said that despite the tension on the border between India and China, there was no single bullet in 40 years. He said that the world has come closer than ever before and the dependence on each other has increased. This change has made it necessary for India and China to cooperate in trade and investment despite the border dispute.

Modi shared a forum with Russian President Vladimir Putin, Austria and Moldova leaders during the panel discussion in the St Petersburg International Economic Forum. PM Modi said on the question of differences with China on the One Belt One Road project of China that it is true that our border with China is a dispute, but in the last 40 years, there was no single bullet on the border dispute. One belt one road project passes through Pakistan-Occupied Kashmir, which India considers its share. Therefore, while referring to the issue of sovereignty, India had boycotted the recently held top conference on this project of China. 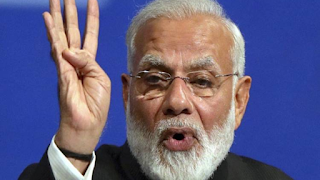 No Bipolar World Like Before Now
Modi said that it is not like the first bipolar world, when the country was either connected to America or the former Soviet Union camp. He said that the relationship between India and Russia has come to the test of time. The reason for this is that the relationship between the two countries is based on belief. Modi said that it is a world connected with each other and dependent on each other. So there can be some dispute and cooperation between the countries.

The PM said, "The 24-page St. Petersburg announcement issued after his summit with Putin is the sacred document of India-Russia relations. I know that the world will closely examine every word about the future direction of our relations. ' On the issue of China, he said that despite differences, New Delhi and Beijing have come together on the BRICS platform to set up two financial institutions, of which China is a India-based partner in an institution and a BRICS bank where the two regional powers are allies.

Modi said that the world's interdependence and growth is increasing. We all believe in development with everyone. This is not just for domestic programs, but also for international cooperation. We want to take everyone along with us for the global development.
---Sonal
By Ashish
Email ThisBlogThis!Share to TwitterShare to FacebookShare to Pinterest
Labels: News