On Wednesday, a suicide bomber blew up a busy bus terminal in Indonesia's capital Jakarta, which killed at least three people. They include a policeman.

Several other police officers and civilians were injured in the blast in the street near the bus station in Jakarta. This caused panic among the people. It is not yet clear who was behind the attack, but the country has recently been placed on high alert in view of the attacks by terrorists of the Islamic State (ISIS) terrorist organization.

Police chief of Eastern Jakarta, Andrey Vibbo told Metro TV, "Two explosions occurred one after another at 9 pm (Indian time at 7:30 pm). He said, considering the loss, I can say that the explosion was very big. 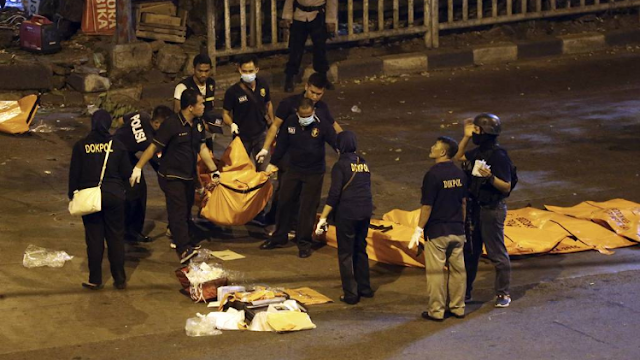 Significantly, the Muslim population is the highest in Indonesia. Six people, including three policemen, were killed and four assailants were killed in the blasts and firing on six places including a café near the United Nations Office in Jakarta in January last year. ISIS took responsibility for the blasts.

Indonesia has been under the grip of Islamic terrorist incidents since last 15 years. In the 2002 Bali bombings, 202 people died. IS's devilish movements from Asia to Europe are troubled by the countries. The dangerous ideology of IS has led to the disappearance of many Muslim youth of the world including India. Terrorist attacks and terrorists become such a young pawn.
By Ashish
Email ThisBlogThis!Share to TwitterShare to FacebookShare to Pinterest
Labels: News