India and Germany in a Bilateral Bonhomie


Berlin, Pret: India and Germany on Tuesday to promote terrorism, support and financing the resolution of stringent steps against those. As well as German Chancellor Angela merkel, Prime Minister Narendra Modi with the business, skills development, cyber security and major issues like climate change, but also comprehensive. The Prime Minister said that India and Germany are made for each other. Kansalteshan the fourth India-Germany intergovernmental with merkel (IGC) meeting in the joint press conference after Modi said, "the pace of development of our relations is fast, positive direction and the floor is clear. Germany always ready and a powerful, India fully competent partner. ' There, merkel said that India has proved a reliable partner and both sides are able to increase collaboration. He said that cooperation between the countries development plans invested a billion euros. 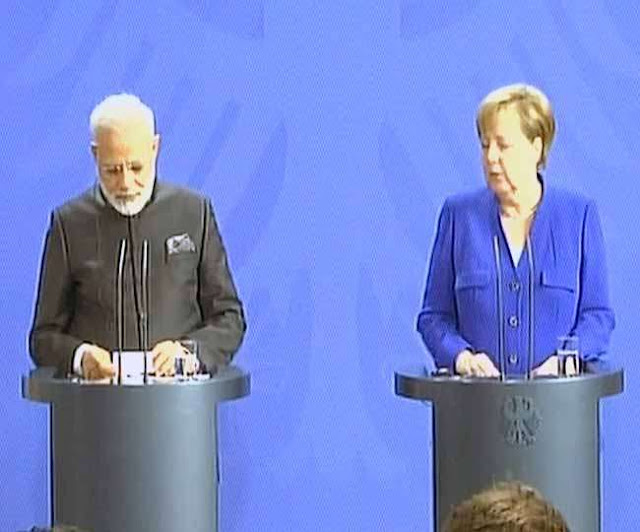 Six agreements signed after negotiations both sides agreed six papers in various fields and signed agreements. Many of these cyber policy, development plans, sustainable urban development, the continued growth of the cluster management and skills development, dijitlaijeshan, to promote railway safety and vocational training such as area. As well as Germany, nuclear supplier Group (NSG) supported the claims of the Indian membership. In addition the two countries in the UN Security Council stressed the urgent need for fixes.

According to the joint statement released after the talks, both leaders expressed concern over the increasing threat of terrorism and condemned all types of terrorist violence. He finalize a comprehensive agreement on international terrorism by adopting him called. Modi said that will face the incoming pidhiayan this problem too so to face it all the forces transforming United. The Prime Minister said, "India and Germany in economic relations has made large gains and parinamonmukh speed can be viewed. In the last meeting of the IGC we German companies to invest in India and fast-track system yielded good results, especially in the case of mediocre companies. '

The European Union calls for the unity of the European Union calls for the unity of Modi, stating, ' Europe and the world are facing many challenges and India believe that Chancellor merkel's world to deal with these strong leadership is needed. "The Prime Minister said that the skills development in Germany from India 80 million youth of the efficiency can help. Football did mention of Modi said Indian young Germany's stringent soccer training can avail of. He mentioned in particular that of German Football League in bangladesh, India is also a large number of fans. Germany's top Football League of Europe Bangladesh associations.