DM and SSP of Saharanpur Suspended


Saharanpur:  After the violence on May 5 in Shabirpur village of Bargaon area, the Yogi Government took action. District Collector NP Singh and SSP Subhash Chandra Dubey have been suspended. A man was shot dead on Wednesday also. So far, 3 people have died in this violence. There have been violence in about 10 places. 60 houses of Dalits have been burnt. Due to the play of the DJ, the controversy had cropped up.

- During the Maharana Pratap Shobhaatra on 5th May in Shabbirpur village, there was a feud between Thakurs and Dalits regarding playing DJs. A man from Thakur side died in this.
After this incident more than 60 houses of Dalits were burnt and many trains were set on fire. This incident was opposed by the Bhima Army of the Dalits.
- Dalit gathered in Saharanpur on 9th May to get justice for Victims of Shabbirpur. The police tried to convince them, but they got flashed. There was violence in 9 places in the district. Shops and trains were set on fire.
- Bhima Army founder Chandrashekhar was nominated in this case. On May 21, Dalits protested against Jantar Mantar in Delhi in large numbers. 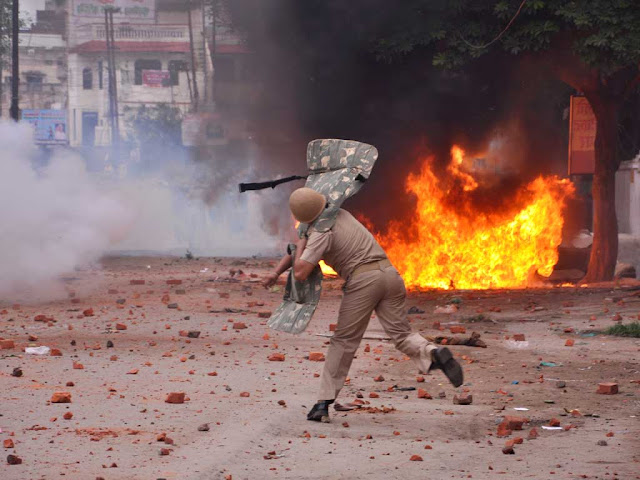 A man shot dead from Mayawati's house
On Tuesday, Mayawati reached Shabirpur village to meet the victims of Victim's violence on May 5. He had announced to provide Dalit Victims with the help of 25 to 50 thousand rupees from the party fund.
Mayawati held a meeting there. Dalits returning home from here were attacked on the way. In it one person died, many were injured. After this, the Dalits set on fire the houses of upper cast people in two homes.
To control the situation, the Yogi Government sent a team of 4 officers from Saharanpur to Lucknow on Tuesday night.
- 5 PAC commandants were also sent from Ghaziabad, Meerut, Aligarh and Agra. In this case 25 people have been arrested so far.
Threatened situations in Saharanpur
5 May 2017: Shibbeerpur village, a fight between Dalits and Thakurs, death of a man
9 May 2017: Clashes between dalits police, 9 places violence
May 21, 2017: Performing on Jantar-Mantar of Delhi.
23 May 2017: After the Mayawati tour, violence, one person's death
24 May 2017: A person's death was caused by a bullet, one injured.