Patna: Bihar's Nalanda district thursday evening in a moving bus in Harnaut fire, eight people lost their life and more than 20 people got injured. The condition of the injured is disconcerting being discussed 10.

Meanwhile, the Government of Bihar announced 4 lakh compensation to the deceased. According to police, a passenger bus from Patna was going, Harnaut Sheikhupura on markets close to the GRA-dhukar burning just started suddenly. Hear the story of the fire on the bus as passengers sitting on the bus in chaotic haryanagovernment Mach and began to run down to the traveller. See the fires just looking in their grip. Due to the fire and smoke, just in the last part of rider caught several people. The locals just extinguish fires, but plenty of fire was so fast that their effort was wasted. Later, after the arrival of the fire fighting squad team, the fire could be put out. 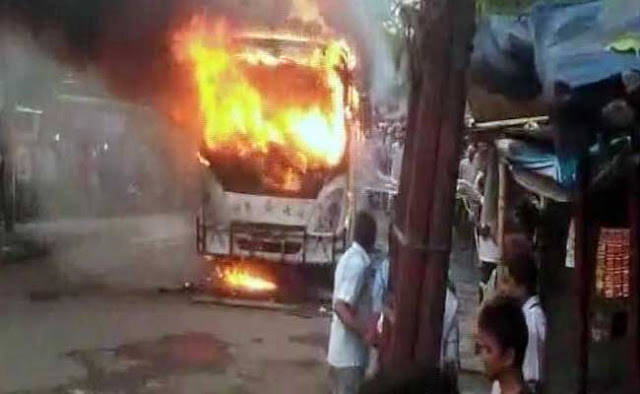 Nalanda SP Kumar Ashish reported that eight people were killed in the incident while more than 20 people were injured. The injured have been admitted in hospitals. He said that seriously injured two people are referred to Patna. 45 to 50 passengers were aboard the bus. Superintendent of police reported that fire causes is not known by now. He said that according to eyewitnesses, the bus was inflammable materials (carbide). He fears that just from the heat of the engine of carbide and fire on fire, sack of just took your grip. Chief Minister Nitish Kumar expressed grief on the incident.
--Sonal